"Austin, Texas (Though You Could Easily Have Fooled Me)"

I did not do this myself – because our mother was assiduously “normal” – though I am informed that numerous other people have – shamed adolescents, humiliated by their parents’ outlandish behavior, proclaiming,

Situated in Texas but refusing to acknowledge it, Austin’s behavioral proclivities resemble less “Amarillo” than “Seattle”, some evil sorcerer having apparently moved it from the Pacific Northwest to deep in the heart of… someplace it adamantly refuses to identify with.  (Their local motto being “Keeping It Weird” rather than “Shut Up Or We’ll Shoot Y’all.”)

We are here for four days, Dr. M attending a national psychoanalysts’ conference, me
the extraneo
us “Plus One.”  So extraneous, in fact, that there are sessions “non pros” like myself are forbidden to attend, due to “confidentiality” concerns.  (These sessions include case histories – with no names ever mentioned – though the shrinks seemingly still fear I might go, “Whoa!  I know ‘Patient W’!  Wait till she hears what you said about her!”)

And now back to “I’m adopted.”

Generally, you can get a sense of where you are and the image “where you are” wishes to project by the artwork decorating your hotel room walls.  Austin Hilton, Room 1717:  two paintings – one, a Jackson Pollock wannabe “freak-out”, the other, a wisp of, like, candle smoke billowing sideways across a black background.

The Projected Message:  “Forget what you believe; this is definitely not Texas.”

No cowboy hats on the street.  The only pair of cowboy boots I saw were worn by a psychoanalyst from Connecticut I ran into on the hotel elevator.  He said he hadn’t worn them in fifty years, wearing them there, I suppose, in hopes of cultural propinquity.  I was reminded of the mad king in the film Start the Revolution Without Me who, wearing a “chicken suit” to a fancy-dress ball proclaimed, “I thought it was a costume party.”

The first (gourmet) restaurant we ate at, a magnificent meal Dr. M described as “Nouvelle Southern”, had steak on the menu, but it was prominently identified as wagyu beef.  Wagyu beef is from Japan!  I was surprised a line of Texas longhorns wasn’t ambling outside, picketing the premises.

Okay, enough of what it isn’t – which is “what you expect about Texas.”

That gourmet restaurant – nestled inside a more than hundred-year-old stone house real estate agents might cleverly label, “Alamo Inspired.”  (Which reminds me, there is a museum directly across from the Hilton, a converted one-story house once inhabited by Susanna Dickinson who, with her infant daughter, survived the Alamo, serving as the primary witness to that historic event.  Right next to it is the “O. Henry” museum, located in the renowned writer’s single-story abode.  Remember? – “Here’s Adventure!  Here’s Romance!  Here’s O. Henry’s famous Robin Hood of the Old West, The Cisco Kid”?  That’s the guy.)

On an Austin-encompassing two-hour tour, where we were conveyed by a vehicle that drove on land and, miraculously, also floated on water so we could see Sandra Bullock’s lake-facing mansion – we were subsequently informed that Austin’s historic structures are never torn down but are repurposed instead for contemporary requirements.  A landmark-status-worthy nineteenth century home next to the gourmet restaurant houses a currently active accountancy firm.

Still, across the street from the restaurant is a dispiriting eyesore of an elevated parking garage.  That’s what Austin generally looks like to me, as if two diametrically opposed decks of cards were carefully shuffled together, resulting in an incongruous landscape of “Old-new, old-new, old-new, old-new.”  I appreciate half of that.  I’ll leave it to you to decide which half.

“He went to China and established the Environmental Protection Agency.  And also that other thing happened.”

Are you ready for the Trump Presidential Library?  On Fifth Avenue, replacing the Plaza?

“It will be beautiful, believe me.  With a magnificent hotel upstairs for when you get tired from learning what an amazing president I was.  Lincoln had his bedroom?  I have thirty-nine floors, plus a spectacular penthouse.”

What was my favorite “tourist experience”?

(Alone, as Dr. M was attending a session I was prohibited from entering.  Fuck ‘em.  I had a better time anyway.)

With its giant head-to-toe portrait of David (not “Davy”, Mr. Disney) Crockett hanging in the lobby, I was hooked before the free State Capitol tour even began.

And then I was enthralled.

By a chatty and supremely knowledgeable retired schoolteacher who memorably spearheaded the proceedings.  I learned that the Texas Capitol Dome was two-and-a-half feet taller than the Capitol Dome in Washington D.C.

Lamenting that her responsibilities as tour guide precluded her from watching the legislative debate from the gallery, she colorfully appended,

“Isn’t that terrible?  I could just cry.”

And then came my personal moment to shine.

Pointing to a portrait adorning the senatorial Wall of Notables, our guide told the story of the Northern Texan youngster who, lying about his age to get in, wound up becoming the most decorated soldier of World War II.  I was the only one who knew the young Texas war hero’s name was Audie Murphy.

And I’m from Toronto!

Moving on to Austin’s remarkable restaurants, worth the price of admission all by themselves…

We ate a lot of mouth-watering – actually mouth-beer-guzzling – in England, it’s tea that fits the environment; in Texas, it’s micro-breweried beer.  Now where was I?  Oh yeah.

We ate a truckload of (ostensibly Texas-raised) beef:  Brisket, beef tacos, steak, a great hamburger, more brisket – more beef in four days than we eat at home in a month – where it’s usually “turkey burger on a Gluten Free bun.”  I was once informed that I had healthily unclogged coronary arteries.  I am not at all sure that is true anymore.

We also heard two country bands performing at the Little Longhorn, what they call,  a “Dive bar.”  They were pretty good.  Though I imagined blowing them away with my rousing rendition of “Rawhide.”

You travel to enjoy novel experiences.  At the airport departing the city, there was a worthy addition to my traveling “Memory Bank.”

I had purchased a New York Times, to wash away the taste of the Wall Street Journal provided by the hotel.  As I paid for it, the homegrown cashier inquired,

“You need any gum with that newspaper?”

I have visited many places.  But I had never been asked that before.  (I politely said, “No, thanks.”)

How was the trip overall, you curiously enquire?

I wear a lot of t-shirts, for exercising and simply “casual attire.”  When I am elsewhere, I habitually buy souvenir t-shirts, the number of t-shirts reflecting the quality of that excursion – the more t-shirts I purchase, the better time I had while I was away.

Our trip to Austin was a “Four T-Shirt” experience.

What can I tell you? 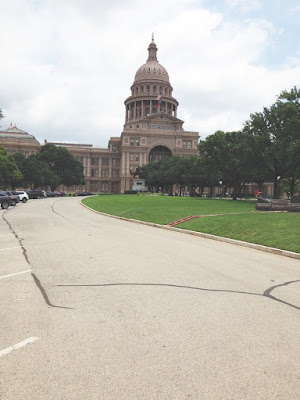 Loved the F bomb ... keep 'em coming. Maybe not among your readers but I'm fairly certain that most Canadians know more about the States than many Americans do. We don't understand it, but we know it.