"A Message From Panton - Part Two"

Call it an “homage.”  Inserting “nothing” where Syd put in “teeth.”

Yesterday, in a darker revisiting of The Oxford Experience, which I famously attended last summer, I considered the possibility that, although from my imagined perspective, I was a “visiting student”, from The University of Oxford’s perspective I was a gullible “customer.”

“I say.  Have you noticed how frightfully empty the place is during the summer?  Why not create a program called, let’s see now… The Oxford Experience, inviting starry-eyed foreigners to take week-long classes, under the illusion that they are enrolled here full-time?”

“Well I am from Oxford.”

Let me be clear here.  Nothing can erase the exhilaration of waking up each morning, heading out to the “quad” before breakfast in “The Great Hall”, wondrously jabbering, “Look where I am!”

That one’s a keeper.

But was this actually a serious exercise?

Or was it meaningless “filler” in a really old school?

What placed this cynical filter on what I only slightly exaggeratedly called, “The greatest experience of my life”?

I had a teacher at Oxford.  “Teacher Jim”, I called him.  Not a begowned venerable professor.  An itinerant “Philosophy Man”, cobbling a living through cumulative employment.

“Teacher Jim” was sharp, and savvy and funny and smart, offering insights on issues I had never considered, selected data nullifying my biases, reasoned arguments forcing me to think.

In short, he was just what I’d hoped for when I signed up.

During mid-class “breaks” on our way to coffee and “McVitie’s Digestives”, I badgered “Teacher Jim” with troubling questions and concerns, and he would generously respond.  I was enchanted.

I had a smart friend, with an overseas accent.

A while after I got home, I emailed “Teacher Jim”, recommending a book I had read called American Revolutions, whose challenging thesis was that the American Revolution was less about “rights” than it was about real estate.  (In the 1760’s, Benjamin Franklin himself was in England, seeking a large land grant, which he could then subdivide, sell off in “parcels”, and get incredibly rich, offering no mention whatever of “life, liberty and the pursuit of happiness.”)

I was thrilled when “Teacher Jim” wrote back.  We had made a “connection.”  We would be “Thinking Buddies” forever.

I immediately replied, asking for reading direction concerning the vexing question of “the Truth.”  Did the truth actually exist?  Or was what we call the truth merely the collective agreement of the majority?  (More accurately, people with power who considered themselves the majority, although, numerically, they weren’t.)

I did not hear back from “Teacher Jim.”  About that question.  Or anything else.

Recently, after an extended interim, I sent him a post I wrote entitled, “Truth Versus Fiction – The Winner And Still Champion:  Fiction” (6/17/19.)  I thought it would be right up his alley.  Plus, an ice-breaking opportunity to re-bond.

I sit by my desktop.  Scanning my emails.

That’s when memories of The Oxford Oxford started to curdle.

I wasn’t a “visiting student” at Oxford.  I was a mesmerized hayseed caught in a profitable stunt.  That one e-mail exchange?  That’s like buying the “miracle” no-stick frying pan, and getting an accompanying spatula along with my order.

“The Oxford Experience includes one ‘return email’ from your teacher.”

At which point, the contractual agreement has been faithfully fulfilled.

Maybe I expected too much of the program, and the teacher.  For them, it was “business.”  For me, it was a fantasized dream come to life.

Still, like an undaunted wife going down to the sea, shading her eyes looking for hope, I daily scroll through my emails,

Searching for a sail.

I don’t understand it.

The man signed my diploma. 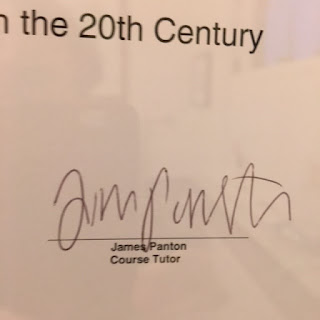 "A Message From Panton"

(It is hard not to be hyper-dramatic when there is no one to say, “Stop being hyper-dramatic.”  The blessing and drawback of blog-writing:  No one keeps you sensibly in check.)

Okay.  (After that italicized introduction.)

This time last year, I was packing for Oxford.  A week of magical residence at Christchurch College, housed in a venerable dorm room, going to classes, taking thrice-daily repast in the hallowed “Great Hall,” of Harry Potter acclaim, as if it weren’t sufficiently famous, which it is.

I had gained inclusion to this unique opportunity by the proverbial “hair.”  I was originally rejected, my inability to “scan” my Application Form during the determining first hour of “Sign-Up” leaving its subsequent arrival too late.  Despite help from a younger family member later that same day, I received a formalized “Sorry, no”, in administrative response.

I was crestfallen.  I really wanted to go.

Finally, months after, ironically, Dr. M’s acceptance (after her original rejection) to “Four Hundred Years of English Gardening”, I received the belated emailed announcement that I was in.  (I later discovered that, denied the appropriate paperwork, an invitee from Myanmar was forced to drop out, my fortunate inclusion arising from a Myanmarian stranger’s bad luck.)

(During my “purgatorial” vigil on the “Waiting List”, hoping to draw chuckling attention with “Colonial silliness”, I had emailed them regularly, requesting substitute placement, should some accepted candidate “drop out, die, or decide to attend Cambridge instead.”  I like to think that that helped.  Though perhaps I was just “Next on the list.”)

An alternate storyline:  I was “Fated” to attend Oxford.  Another pleasing scenario: “Fates”, displaying personalized behavior.

Here’s where my fantasies kick in.  (Though the preceding may be fantasy as well.)

Using my rich and fertile imagination, I pretended – not overtly, but spontaneously naturally – that I was really at Oxford.

Not as a casual vacationer, taking “puff-ball” courses like “The Beatles” or “Great English Murder Mysteries” but as a “serious academic”, taking “Political Thinking in the Twentieth Century.”  (My alternate selection, after the equally meaty “Ideas of Freedom.”)  I yearned to exceed the contrived trappings of The Oxford Experience.  I ached to be actually at school!

And that’s exactly how I behaved.

I read the assigned textbooks months before classes began, “Sharpie-ing” salient points and creasing corners of pages.  When we finally convened, I asked cascades of questions.  I listened.  I learned.  My unearthed bias and ignorance on glorious display.  That was valuable too.  I was a student.  Studying political thinking.  And my unrecognized self.

In retrospect, it is possible my Oxford Experience stemmed more from my eager imaginings than what its providers honestly intended, taking the proceedings more seriously than they ever conceptually had in mind.

I saw the event as “Fantasy Camp for Thinkers.”  But perhaps it was, in fact, just “Disneyland for Dreamers.”

It now occurs to me that I have, though not deliberately, over-extended my set-up, leaving “To Be Continued” the inevitable interim result.

On second thought, perhaps I did do it deliberately.  I loved my Oxford experience so much that, maybe unconsciously purposefully, I held back delineating the “letdown”, allowing me to recall that memorable week a little longer the way I want to.

And not, perhaps, the way it actually was.

"When Did Sad Become Funny?"


I know Stan Laurel was sad.

Undercutting my point before I even begin.

But he was different kind of sad.

Which is different from the sadness generated by certain comedians today.

A sadness based on the utter hopelessness of human existence.

Which I thought was the condition comedy was basically trying to relieve.

Maybe times have just changed.  To the point where comedy is simply reality with a “You might as well laugh” tag on it.  With the tacit corollary, “Because what else are you going to do?”

I read an article about comedian Erica Rhodes.  I read the whole thing – and it was quite long – because I did comedy myself at one time and I wanted to check out how things were going.

Near the end of the article, I encountered a line that struck deep in my “What the heck is going on?” area.

Journalist Jeffrey Fleischman’s extended profile – which gave off the sense that if he wrote it right, he might get her to go out with him – capsulized Erica’s comedic approach, saying it treaded “the fine line between despair and hilarity.”

I had no idea that’s what we were supposed to be shooting for.  Of course, my favorite film comedies are The Court Jester, The Three Amigos, and Pee Wee’s Big Adventure.  Where they unequivocally weren’t.

But as I said, maybe times have just changed.

Before commencing this effort, I checked a few clips of Erica Rhodes performing in various comedy clubs, collected on YouTube.  The first thing I noticed is that Erica Rhodes has a distinctively high voice.  (She defuses that early, saying, “This is my voice.”)

The problem I had with her voice was that, depending on the venue’s amplification system, sometimes I could hear what she was saying and sometimes I couldn’t.  (Leaving me wondering whether she ever came offstage after an inaudible “set”, thinking she bombed when it was really the microphone.)

The other thing I noticed about Erica Rhodes is when she reached for a curse word, she said, “Shoot!”  Which I found eminently endearing.  I have considered writing sympathetically about the substantial cohort of people who must endure words and pictures that genuinely offend them and can do nothing about that because “That’s just where we’re at, so get over it.”  I am not sure which non-conservative would be brave enough to explor that countercultural predicament.  It is apparently not me.

Getting to her material, which, for her mother, seeing her perform for the first time, was the one tiny little thing she had trouble with.

I generally liked it.

But I’m not her mother.

There is an audacious “darkness” to Erica’s material that appeals to me, along with her ability to originally notice such things, and the courage to make that her act.

The now mid-thirties Erica asks if any people in the audience are in their twenties, and when they boisterously acknowledge their presence, she says, the twenties are a good time,

“… but I don’t relate to it anymore, ‘cause I’m like, ‘You guys are so cute, because you still think you matter.  Like the rest of your life is just this really long journey where you find out you matter less and less and less every day, and then, you die.”

It is quite possible that one generation’s comedian is another generation’s “someone you want to get away from at a party.”  In one Erica Rhodes YouTube clip, she said the word “die” and the word “dead” in a span of three minutes and twenty-four seconds.

No wonder I liked her.  Though my list of “film favorites” reveals a stylistic ambivalence.  It could be I like both.  A balancing menu of poison and pie.

I just think something is “off” in Erica’s relentless conceptualization.

I understand the idea of making others as miserable as you are.

I’m just not sure that's comedy.

(Unless times have just changed.)