"What was your favorite part of the movie?” four and-a-half year-old Milo was asked, as we exited the theater after seeing The Secret Life of Pets.  The boy’s answer was instantaneous:

(In a moment of terror, a frightened bunny character expels a flurry of pellets that peppering the ground like metallic B-B’s.)

Before I start in on The Secret Life of Pets, allow me to first pay tribute to Mother Rachel, who has raised two exemplary children – four-and-a-half and almost two-and-a-half – so successfully that they can sit through an entire feature film politely and attentively which I don’t know about you but I could not have accomplished at either age had I been taken to a movie theater to try which I wasn’t.

(Still, twelve twenty-five for a two year-old’s movie ticket?  Children should be charged on the basis of how much they understand.)

The Secret Life of Pets… well, first of all, the movie was not made for me, and second of all, I am averse to assessing a creative endeavor as being “good” or “bad” – that is definitionally subjective, and besides, people work hard on this stuff.  Let me just say that from a storytelling standpoint – for which I claim professional expertise – The Secret Life of Pets is…

It’s like they had this workable idea for a movie – “What do pets do when their owners are away”? – and they ran with it.  By which I do not men they skillfully expanded the original premise.

It’s like a gun went off and all the characters began running.

There are fleeting allusions to “bro”-mantic friendship, teamwork and caninical affection.  But these glanced-upon qualities play “twelfth fiddle” to, I don’t know… just running.

Of course, none of this actually matters.  You know the saying “Nobody ever went broke underestimating the intelligence of the American people”?  Well, nobody ever went broke opening an animated feature when school is out.  Desperate parents will take their children to anything.

And fall asleep the minute the lights go out.

(I myself may have dozed off longer than I thought I did, missing substantial chunks of the narrative flow, although it is possible the “narrative flow” in this film was nonexistent.  In preparation for this writing, I read the Wikipedia synopsis of The Secret Life of Pets and there was no narrative flow in that either.)

Do not mistakenly believe I am a “phobe” of modern animated features.  I was enchanted by Finding Nemo, especially the Ellen DeGeneres contribution.  (Unfortunately, they took the kids to see the sequel without me.  I could go alone, I suppose (Dr. M having no interest.)  But it’s tricky for a man of my years attending an animated feature by himself.  It’s like hanging around a kids’ playground.)

Of course – and you knew this was coming – my preferred animated features are from way back.  Before I was born, even.  My all-time favorite:  Dumbo (1941.)

Totally hand-drawn.  Emotionally grounded.  Psychologically illuminating.  How often in life have I enlisted the metaphor, “Dumbo’s feather”?  (An ancillary device allowing you to accomplish monumental feats you can actually accomplish without it, which is the lesson you eventually come to learn.)

Throw in mother-and-son inter-twining their trunks through cruelly separating jailhouse bars and a jazzily memorable, “I seen a peanut stand, I heard a rubber band, I seen a needle that winked its eye, But I be done seen about ev’rything, When I see an elephant fly...” and you have a movie whose identifiable storyline and classic pictorial execution have stayed with me since childhood.

What will kids remember about The Secret Life of Pets?

One of the jokes animated feature writers insert to keep themselves interested and keep the adult members of the audience from wishing for cyanide popcorn.

Trying to mobilize the neighborhood dogs to help rescue her jeopardized boyfriend, a Pomeranian (a possible canine relation) reminds the recalcitrant pooches:

“When you got ‘fixed’, who taught you how to sit comfortably?”

I liked that one.

Yielding a common denominator for Milo and me concerning The Secret Life of Pets:

We both remember one joke. 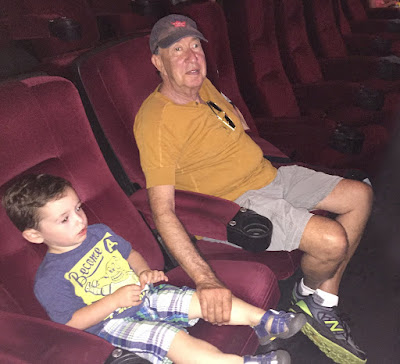 Pappy and two year-old Jack.  (Who remembered no jokes)  Photograph by Rachel Braude.

My family and I had actually been looking forward to that movie. We enjoyed the trailers we'd been seeing for months and we always make up stories about what our pets do while we're gone. So, it seemed like a natural fit. But then we read the synopsis and most of it sounded like a rip-off of the Shaun the Sheep Movie which we thoroughly enjoyed. So, why pay exorbitant prices to see a similar movie when it couldn't be as good? Your sort-of-review makes me glad we didn't go.

Thanks, Earl (and Milo and Jack).