This is the culminating element of a story that began more than fifty years before.

This would be the biggest story of the trip, if it hadn’t been this trip.  On this trip, a recognized “All-Star” slugger like this one finds itself down in the batting order.

I cannot affix the exact number, but on however many visits we have made to London since I lived there in the late sixties – that being a handful at least, and not the handful of a guy who lost fingers in a milling accident – I have magnetically – meaning I could not help myself – found myself transported up the Northern Line of the Underground to Hampstead, where I dutifully crossed the street from the station and turned left down Heath Street, taking the first right onto Church Row, and making my way to “10 Church Row”, where I once lived for seven months from early December 1966 to early July, 1967.

I just had to go there. To do what?  Nothing.  Other than standing nostalgically across the street on the sidewalk, gazing at the place, which, in its physical appearance, looked exactly the same as I remembered it.

I am not my brother. My brother can - and has - rung the doorbells of every place we ever lived in in Toronto, and with a charming persuasiveness, find himself touring our previous domiciles, his host more than happy to oblige.

I have no such charming persuasiveness.  Nor the chutzpah (shameless audacity.)  Nor the unstoppable determination.

I’m a dreamer.  Lacking the characteristic aggressiveness to intrude. Asking a favor from a friend can be difficult.  Forget about asking for one from a stranger.

And so, every visit to London, I travel to Church Row, standing directly across the street from the… wait.

Let me include this.

On every occasion, you want to think – at least I did – “This time it’ll be different.”

This time I will muster the audacity and the – I know this is a judgment – shamelessness to ring the bell and ask to come in, inevitably disappointing myself, because, in truth, there was no chance that was every going to happen.

Including on this current occasion.

Still, on a Tuesday morning, while Dr. M enjoyed a scheduled Hammam (traditional Turkish massage) experience at the Health Spa in Harrods, I made my traditional – futile – pilgrimage to Hampstead.

The day found me once again standing, this time, noton the opposite side of the street but on the sameside of the street – what courage – positioned directly before the terminally barring front door, with the fashionable brass number “10”, fastened carefully at the top.

There I stood, taking pictures of the front door with my telephone.  Souvenirs of my paralyzing inertia.

And then, the door suddenly…

And a middle-aged woman came out, pushing a fashionable stroller.  Struggling to control my excitement, I heard my voice say,

The emerging woman I later learned was called Margaret was the Nanny, taking the baby out for a “Pram Ride.”  In an explosion of verbiage, I explained to her that I had once lived there in the sixties. Margaret listened like she was actually interested.

This was a wonderful step forward.  I was actually talking to somebody from the house.

And then it got better.

Voluntarily, Margaret said she would tell her employer I was there, she and the child disappearing into the house before my obligatory, “You don’t have to bother.”

Moments later she returned, explaining that her employer was on the phone in the garden.   But when she was finished, she said she would come out and say hello.

My heart is pounding writing those words.  And this happened last month!

Shortly after Margaret departed with the baby, me, standing alone before the forbidding portal of access, the “Lady of the House” emerged, greeted me cordially, heard out my story – “I lived here for seven months in 1967” –

… and she invited me inside.

Imagine comedian Bill Cosby before the conviction, his face brimming with gleeful excitement:

And there I was. Stepping into a place I had wanted to enter for 51 years.

Was it the same?

No.  And yes.  The house’s basic geography was the same.  The winding staircase hadn’t moved.  And the kitchen was still kitchen.  (“I used to have ‘cooking privileges’ here.  But I burnt the rye bread, because the way I sliced it – one side way thicker than the other – the bread inevitably got stuck in the toaster.”)

Contrasting its original ordinariness, the house was a now “Designer’s Showplace.”  My impeccably groomed tour guide – a financial adviser for affluent families – explained that she and her husband had bought the house two years ago from the divorced wife of a famous film director.  I did not ask who was responsible for the beautiful decor. Hey, she let me in the house.  It was not in me to pry.

Previously larger rooms had been bisected for practical purposes, making it difficult getting my bearings.  But when she showed me the Master Bedroom, I immediately realized, “I used to live here.”

Well not “immediately.” Because the room was considerably smaller.  But when I saw the familiar view out the window, I knew that this was (a portion of) the spacious bedsitting room that had earlier been my home.

(There is a story about me envying the revelers across the street visiting comedian Peter Cook every Sunday.  But I have told that story before.  See: “I Knew If I Had My Chance…”  It’s worth the “Search”, I believe.)

Being in that room gave me veritable chills.  There was me, 73, standing where me, 22, had once subsistingly lived and breathed.

After a leisurely tour of the premises, my generous guide walked me back to the kitchen, finding me a bottle of water for the road.  She then escorted me to the door.  I thanked her effusively for her kindness, playfully remarking as I departed,

“I was hoping there’d be a plaque.”

To which she winkingly replied,

“Not for just seven months.”

And then it was over.

I had been in the house. I didn’t do it myself but I was in there.

Now I could happily cross it off of the list. 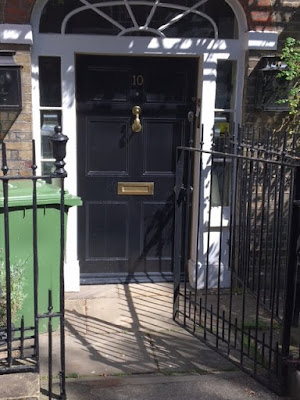 I went in there.
Posted by Earl Pomerantz at 4:00 AM

Your hostess was kind enough not to mention that to get a plaque you also have to be DEAD and have been so for I think it's like 20 years. So who knows? You could *eventually* still qualify. :)

You could write down what you would like on the plaque, eventually, and send it to them. I'm sure they would keep it on record for the big ceremony.

A very nice story. I'm glad you had this nice surprise. And I'm glad it is still being used as a living space. I wonder if the baby will ever be told about the day the famous Hollywood writer stopped by?

Did you hide your pants and cross the street?

I know the draw that place has on you. For me it is 3 Nevern Road, Earl’s Court. December 1966 - May 1967. My wife is sick of me going there to look at it whenever we go to London. Was a dingy rooming house then but an upscale street now. Also make her go look at my place of employment - The Windmill - which now bills itself as “Best London Strip Club & Lap Dancing Bar”. Then it was a cinema upstairs and private gambling club downstairs.