My older brother has this wonderful joke where he says about a guy,

“He had a mustache but he didn’t wear it.”

I love that joke because it sends dueling realities crashing against each other, the essence of a sublime subsection of comedy.  You can have a mustache.  And you can not wear whatever you want.

Except a mustache.  (Which sprouts straight out of your face.)

That’s why that’s funny. (It is also why I don’t care to dissect comedy.  It invariably vaporizes the laugh.)

I rejoice at the blissful absurdity of that joke, a sparkling example of “pure comedy.”  It is simply a joke for the sake of a joke.

(He queried, not knowing where this is going but pretending he does so as to proceed with this post.) (And possibly discover he knew more than he’d originally believed.  Time – and further exposition – will tell what is ultimately the case.)

When I was 27, I passed my driver’s test in Toronto, after failing miserably twice before.  (Meaning both that I drove miserably during the driver’s test and I felt miserable after I failed.  You know you’re a “gone goose” when you wait ten minutes for the four lanes of oncoming traffic to adequately clear – as required by the “Manual” – and the examiner squirming impatiently beside you goes, “Come… on!!!”)

Before this unpromising third effort, I happened to mention that my driver’s test was scheduled for tomorrow morning.  Where I happened to mention it was at the production offices of Canada’s national television broadcasting network.  (The CBC, above Bassel’s Restaurant on Yonge Street, home of the square hamburger and their incomparable chocolate cream pie.)

The next thing I knew – if “the next thing” can be extended to the following morning and in this sentence it can– there was a ring at my apartment doorbell, and when I opened the door, standing there was a full production team from a network public affairs show called Of All People, coming to film my final driving lesson and my driver’s test itself.  For the entire country of Canada.

And you know what?

(Unless the examiner did not want to ruin the segment by failing me.  Let’s say I succeeded on my own.  For which I had proof.  There was no restricting “Passed on TV” stamped on my new driver’s license, limiting my driving to televised filmings.

Yes, I had changed Motor Vehicle venues, tested on College Street rather than Keele Street, the site of my previous failures, though I am unaware people drive better on different streets.

All I knew was I had finally passed my driver’s test.

And that I had successfully done so on television.

I am standing on the mound at Kovaleski Stadium in South Bend Indiana, a part- owner of the home team South Bend White Sox, honored with throwing out the ceremonial first pitch before the game.  (A last-minute replacement, as the more famous person they expected failed to appear.)

I am no athlete. Which may be the biggest understatement in my almost eleven years of blog writing.  (I will not go into specifics.  I engage in this exercise to cheer myself up.  Trumpeting my physical deficiencies would surely trigger the opposite effect.)

The stadium’s loudspeaker – as well as the electronic scoreboard – announces my name.  I am identified as “The creator of Major Dad” – I actually “developed” the series, though only the scrupulously nitpicky would demand credit clarification when one stands prominently on the mound.

My “Moment of Glory” finally arrives.  The catcher crouches behind home plate, his targeting mitt poised for my ceremonial delivery.  I judiciously “toe the rubber”, rock into my “wind-up”…

And throw a perfect strike to home plate.

The catcher does not even move his glove; my offering lands dead center.  (A gentle “rainbow” offering, but still, right on the money.)

So look what happened here. (It would evidently appear.)

I passed my driver’s test.

Because the cameras were rolling.

I threw a perfect strike.

Because the assembled South Bend crowd was watching.

Who knows?  (He summarizingly concludes.)

Maybe you canhave a mustache and not wear it.

I am a natural showman.

And I don't let it show. 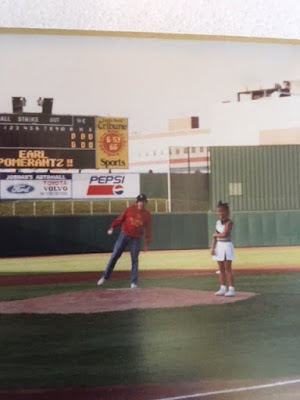 Looks like you can't see the catcher, but I guess you did.

Listened to your segment on Ken Levine's blog, enjoyed it, you both sounded like you were having a good time.

Two exclamation marks on the sign! You know you're famous when you get more than one!

Reminds me of the line in "June Moon" by Ring Lardner and George S Kaufman. The small-town hero tells the girl he just met in the railroad station:
"I treat every girl as if she were my sister, until I know otherwise."