During an open afternoon while attending “The Oxford Experience”, I signed up for a tour for “The English Civil War.”  The involved history was fascinating.  Though our assigned tour guide was less than a “natural” at communicating it. Disappointed by her perfunctory performance, when we were done, I, of course, tipped her substantially more than I had originally intended to,  the prepared two pounds suddenly ballooning to five.

Why tip a person more for a substandard presentation?  Because her desperate delivery suggested she was secretly aware she was “bombing” and I felt uncomfortable confirming that (accurate) belief.

So I rewarded her handsomely for doing a “so-so” job, hoping she would fail interpret my dishonest generosity.  Though her guarded “Thank you” said,

Upon hearing this, I reflexively mentioned that even President Kennedy asserted “Life is not fair”, adding gratuitously,

“And he had Marilyn Monroe and millions of dollars.”

To which my tutor Jim immediately replied,

“There was the back pain, I suppose.”

The joy of my “Oxford Experience” in a nutshell.  In issue after issue, there were holes in in my cherished pronouncements I had neglected to fully explore.  That time, the reminder was presented as a joke. Meaning, it more memorably sank in.

“This place is old!”

Imagine discovering a scribbled memo in my dorm room, reading,

“Note To Myself: ‘Combined solution for Ireland’s population and famine problem:  ‘Eat the babies.’  ‘Too much’? I don’t think so.”

I am riding the Underground south on the Northern Line from Hampstead, headed back to our apartment, near St. Paul’s “Tube” station, when I look out the window at the arriving station whose posted identifying sign reads,

Which instantly tells me one thing:

I am traveling on the wrong subway.

Galvanized by this sudden awareness, I quickly exit the train, find the platform going in the… well, the platform doesn’t go anywhere.  But the subway pulling into it does.  I board the incoming train and head in the direction I had previously come from, retracing two stops.  I get off at Euston Station, and, choosing from eight available platforms, put myself – literally – back on track.  No confusion.  No muss.  And no fuss.

When their country’s team got knocked out during the semi-finals in soccer’s international World Cupafter advancing further than anyone expected them to, an English newspaper headline proudly proclaimed:

“That’s our most popular item,” I am informed.

Making me immediately think, “Then why is the other one sold out?”

Who exactly is being “difficult”, them or us?

I guess that’s why we travel.

If it was all the same, we could happily stay home.

As many understandably do.

On their original visit, they probably turned on what they thoughtwas the “Cold” faucet, got horribly scalded, and they never came back.

Though be prepared for the occasional relapse.

I loved that trip!

This is my class.  (Tutor Jim is three down to my right.)  That adjacent door is supposed to be the door that inspired "Alice In Wonderland."  But when someone else told me that story, they were equally sure it was a different door.  But it's definitely one of those doors. 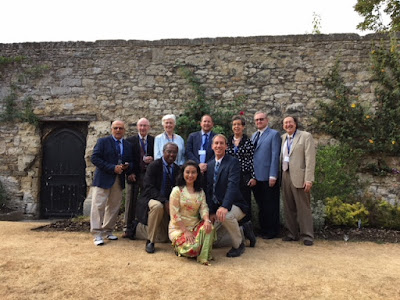 When I first came here, I had a theory for a long time that when the convicts and riff-raff left for America they decided to make everything opposite, just to prove they weren't British any more.

Your tour guide may simply have been taken aback by being tipped, let alone so much. I've never seen anyone tip a tour guide in this country.

I, for one, will look forward to more Oxford stories as you remember them.

I heard an apocryphal story about a hotel in Canada that tried to be language impartial by putting 'C' for Cold on one faucet handle and 'C' for Chaud on the other.

Well Wendy my wife and I were on a coach tour in 2000 and the tour company guide who was English used local guides wherever we went. His comment before we set out on each local tour was that we show the “appropriate appreciation” for the services of the guide. This included the city tour in London. Sounds like Earl’s tip met or exceeded what was appropriate.

You can keep telling as many anecdotes about the trip as occur to you. I love the country, and have thoroughly enjoyed every single one of your posts about it, this trip and when you lived there decades ago.