In the early 1990’s, a man sold me a one forty-second ownership share in a Class “A” (the lowest level) professional baseball team playing in South Bend Indiana, monikered the South Bend White Sox.  Dr. M later revealed the man confided to her that no one had signed their “ownership paperwork” faster than I did.

I barely asked any questions.  You ask questions, you might hear reasons not to do it, and I was uneager to hear any.  This was a rare occasion for me, “passion” telling “intellect” to button its lip.

I wanted to (part) own a professional baseball team.  And the absolute “clincher” was that the city of South Bend was just thirty-five miles from the Indiana log cabin we visited virtually every summer.  Which means I could actually see the team play.  (The only investor, I was subsequently informed, who ever did.  The others took their annual dividends and said, “Where’s South Bend?”)

Named for Stan Covelesky, a Major League Hall of Fame spitball pitcher who ultimately settled in South Bend.  (The spitball was eventually outlawed, but Covelesky was compassionately “grandfathered in”, sanctioned to spit on pitched baseballs till the end of his career.  There was no way he’d have earned a Cooperstown induction throwing “dry.”  As with the knuckleball, it is the spit that makes the ball dart in unpredictable directions, and that was Stan’s indispensible M.O.)

The first time we drove to a game, passing “elephant’s eye” cornfields, the theme from Hoosiers echoing in my ears, I felt the kind of “first day of school” excitement I never once felt on any first day of school.  Though no natural enthusiast of “reality” – fantasy being vastly easier to manipulate – I have to admit on occasion reality… I don’t know… it’s actually happening, and its great!  (I’ve had maybe four of those in my life.)

Heading through the Coveleski Stadium turnstiles after picking up our “owners” complementary tickets at “Will Call”, a man suddenly stopped me, proclaiming in an elevated loudness that I was the “Three Thousandth Fan” and handing me my record setter’s reward – a wicker basket filled with promotional paraphernalia – a South Bend White Sox seat cushion, a miniature replica baseball bat, a local gas station free “lube job”, a gift certificate for a discounted private session at a nearby photographic studio, among other showered beneficences – a cornucopia of “goodies” befitting my attendance-shattering accomplishment.

Aware that I was hardly a “typical fan”, I encouraged him to bestow this exalted honor on somebody else, but he – ”he” turning out to be the team’s General Manager – adamantly refused.  To this day, I do not know if that was a set-up.  If it wasn’t, it was a fortuitous – and deeply appreciated – coincidence.  (Nah, it was probably a set-up)

My (part) ownership of the White Sox – later an Arizona Diamondbacks affiliate renamed the South Bend Silver Hawks, after a sleek model of Studebaker (car) once manufactured in South Bend – was never less than an indescribable pleasure.

We got fabulous seats.  (Always complimentary, and as many of them as we needed.)

We got coupons for free hot dogs and other concession stand comestibles.

We got an “Owner’s Discount” for logoed ball caps and t-shirts at the stadium Gift Shop.

I got to go out on the field – out on the field! – before games, and converse with the every-changing roster of managers.  (The most congenial of whom was Terry Francona, current manager of the Cleveland Indians who earlier won two World Series championships managing the Boston Red Sox.

Terry invited me to come down after the seventh inning and sit beside him in the dugout.  That is totally against the rules, a “civilian” sitting in the dugout.  But he insisted I do it.  And I did.)

In 1993, the South Bend White Sox captured the Midwestern League championship, and being part of the ownership, I received a commemorative ring.  (I had to pay for it, but come on!)  Twelve years later, the renamed South Bend Silver Hawks took the title and I bought another ring.  (This one was distinctly smaller-scaled and I have a suspicion – meaning no disrespect – that it was a “girl’s” ring.  Still, one-and-three-quarters championship rings – the late Ted Williams was the greatest hitter of all time and he never got any!

Best of all – my heart pounds retroactively remembering it – I got to step onto the mound one night and throw out the honorary “First Pitch” before a game.  (The celebrity scheduled to do it flaked out and I was thrown in at the last minute.)

I was too shy to ask anyone to warm me up.  I just went out there and threw it.  The looping throw, in my recollection, took about an hour-and-a-half to reach home plate.  But when it did – oh Happy Day! – it landed dead center in the catcher’s unmoving glove.  When he came out to hand me back the ball, the catcher announced, with seeming practiced enthusiasm,

“You t’rew a helluva pitch.”

Damn right, I did!

We remained part owners for about fifteen years.  Then, with no advance warning, the determining “General Partners” – I and the forty-one other part-owners were “Limited Partners” – decided to sell the team (earning its investors a respectable profit in the process.)

And that was that.

Time goes fast when you’re old and you want it to go slow.  Recent research reveals it’s been eleven years since we attended a game.

Feeling nostalgic for the experience, we decided to go back.

It wasn’t the same. 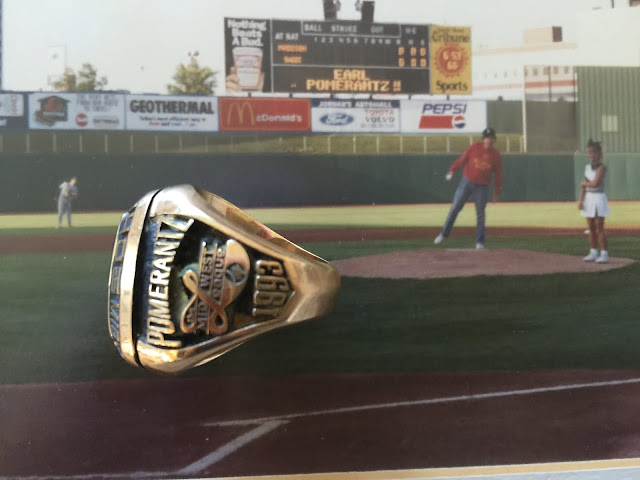 Is that you on the mound? You look like you're in pretty good shape there. In case others wonder what I'm talking about, click on the picture to see more.