The definition of a good trip to Michiana:

“No dead deer by the side of the road.”

We had a good trip to Michiana.  Hats off to the innovative “Wildlife Vehicle Avoidance Program.”

Hardly up there as a ”Safety Campaign” with “This is your brain on drugs…” but highly effective nonetheless.   Judging by the precipitous drop in roadside carcasses, the deer have apparently come to understand that car headlights are not intended to illuminate their advances across the highway.  Either that, or it was a slow season for curious deer.

“Why would the other side be more interesting that this side?”

… may explain the drastic diminishment of dear deaths.  In which case…

We found the cabin in immaculate condition.  Somebody cleans it before we get there.  Not strangers, out of Midwestern generosity:

We pay them money to do that.

And we are sincerely grateful for their efforts.  No infestation of mouse droppings greeting our arrival.  No “Is that possum poop?” deposited on the couch.

Which has greeted us on previous occasions.

There is nothing more disheartening than a four hour-flight from Los Angeles, followed by an hour-and-a-half car drive to the cabin, followed by two hours of Swiffering, disinfecting and calling up Goodwill to cart away couches no one will ever sit comfortably on again.

We just showed up, unpacked, took the coverings off the furniture, lugged the table, two chairs and the futon mattress onto the porch, and we made the bed.

No TV.  No infuriating campaign coverage.   Plain and simple:  We had come there to relax.

Not that I have an overwhelming schedule at home.  But I do have a schedule – morning exercise, daily blog writing, practicing the piano, interspersed with medical, dental and regular bodywork and (therapeutic) pedicure appointments.

Re-examining that flurry of activity, I don’t know how I handle it.  An annual break is definitely understandable.  Or in my case, three annual breaks – Michiana, Hawaii and that fitness place we visit in Mexico, needed sanctuaries from the habitual grind.  Could it be possible I am actually too active at home?  (Or am in I in need of a “Chronic Fatigue” specialist?)

Dr. M is a goer and a doer.  (In fact, a two year-old Anna once composed a musical tribute to her mother, intuitively entitled “Go-ey, Do-ey.”  (Not registered at ASCAP so it’s yours if you’re okay stealing from a two year-old child.)

Dr. M’s the one requiring these recharging intervals.  I just tag along, doing very little in an alternate venue.

At the risk of dousing your illusions, even in laid-back L.A. the pressurized “business of life” inevitably wears people down.  We’ve come to our cabin to take it easy, enjoying our books and looking out the window.

Here’s how long that lasted.

We eat our vacation “kickoff dinner” at Casey’s, situated in New Buffalo, about five miles east of us in Michigan.  Which is an hour later than in our cabin in Indiana.

I can never get over that.  (Though it is quite possible you are weary of hearing about this.)  Across the street from us in Michigan – the interstate dividing line bisecting Michiana Drive just outside our screen-porched window, it is actually an hour later (Eastern Time) than it is in Indiana (which in our particular county is on Central Time.  But that’s another story.)

“Dark”, in fact, arrives the same “moment” for both of us; our clocks just say it’s an hour earlier when it happens.  Which I still cannot entirely get my head around.  How can it be the same amount of “dark” in two contiguous places, yet there is this full hour of time difference?

Fun With A Cellphone:  Watch the phone’s digital clock switching back and forth as you sadistically cross and re-cross the “dividing line.”

I have technology in my power.

Anyway… says the man mesmerized by the concept, a deranged cat battling with a ball of chronological yarn…

Seated at Casey’s we order the “lake perch”, a tasty novelty to visiting Angelinos – where we don’t have a lake and there aren’t any perch – ready for an unhurried dinner, prior to a leisurely evening back at the cabin.

Having picked up some promotional literature when we came in, we check out the local “Calendar of Events.”  At some point in the process we notice that at the Acorn Theater in Three Oaks – about seven miles away – there is a “One Night Only” joint performance of music and reminiscences, featuring Peter Asher (of Peter and Gordon “A World Without Love” fame, who later worked with the iconic likes of James Taylor, Carole King and Linda Ronstadt) and Albert Lee (one of the greatest rock guitarists of the last half century.)

When would that unmissable concert take place, we duly noted?

We wolf down our lake perch, exit Casey’s like we’d just cleaned out the cash register and race our Buick Regal Rent-A-Car over to neighboring Three Oaks.

Such was the welcoming introduction to leisurely vacation.

Oh well.  We were there for ten days.

Perhaps things would slow down after that. 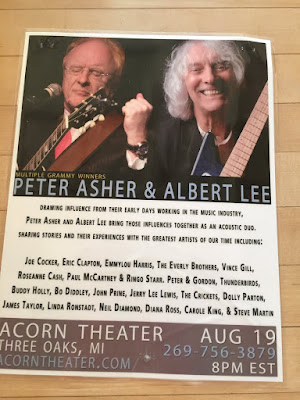 Reminded me of the "Dance mailman, dance" line from Cheers. Forgot what I had for breakfast but that line has always stuck with me.

Maybe no more dead deer along the highway because they've all been "tenderized" out of existence by various vehicles and the other deer seem to have "gotten the message" that maybe they should move on to less deadly locales.

Peter Asher also has a sister, Jane, who is a highly regarded English actress (and I think she also has a business making cakes).

Thanks for making the effort at the last minute - and very happy you enjoyed the show. We had fun. Peter Asher.

Thanks for making the effort at the last minute - and very happy you enjoyed the show. We had fun. Peter Asher.

Always enjoyed Peter and Gordon. Great harmony! And of course, Albert, there aren't many equals in the guitar world. Sounds like a great night!