Here’s the story… all in one place.  From my own personal perspective.  (As it is the only perspective I’ve got.)  (And it is so seductively dominant it smothers my ability to write from any other perspective.)

Father’s Day arrives.  We have a family gathering in our basement.  Before we eat, Anna insists we all assemble on the couch so she can present me with my Father’s Day present.  (I wonder what it is.)

She instructs me to read the card first.  Turns out, it’s a multi-pager.

“”Happy Father’s Day!!!  We got you an electric razor which wasn’t a surprise at all (since you asked for it several times), but we thought father’s day isn’t complete without a surprise…

I flip to the second page, which reads,

“This page is for suspence (sic).”

I then curiously turn to the third page, which stunningly announces:

On the bottom of that page is a sonogram of the blessed Baby Girl in utero.

Including her projected “Due Date”:

The awaited Baby Girl in utero is not due for another seven weeks.  With time to spare, I head off to Rancho La Puerta, because my pants don’t fit, except for my Levi’s “Stretchy Jeans”, and even they’re going, “We are not miracle workers!”  I am scheduled for a trip to Toronto the following week and, being winter, I felt it unwise to show up there without pants.  I wisely went to the Ranch to drop a few.  Pounds, not pantalones.

I get a call from Los Angeles.  Anna’s just had a sonogram.  The seven-month
Baby Girl in utero, although otherwise healthy, is experiencing nourishment difficulties.  As a result, the projected “delivery” has been advanced from January 20th 2018 to sometime before New Year’s.  The six-and-change-week “Due Date” has now contracted (to pun intended, honest) to three.

Cause for worry, but not serious concern.  (Although the two feel anxiously interchangeable.)

The evening before I am to return home, I receive another phone call, informing me that Anna is now in the hospital.  A follow-up precautionary sonogram prescribes “round-the-clock” monitored surveillance.

I feel like I am selfishly in the wrong place.  A once seven-week “Due Date” has shrunk to “The day after tomorrow.”  And I’m having fun at the Ranch.

I am departing Rancho La Puerta, somewhat wobbly, and vulnerably alone.  The sacred mountain’s invisible Mariachi band bolster my spirits with me a stirring, encouraging composition:

I am determined to remain positive.  But being me, the darker alternate lyric,

looms shatteringly on the periphery.

I get home.  I quickly jettison my luggage and head immediately for the hospital.  The medical staff seems upbeat.  I am not certain if they actually are or it’s how they are taught to be in medical school.  I put on a “brave” face.   But despite my most determined efforts, the face beneath it occasionally breaks through.

We come back the next morning.  The procedure – a “C-section” – takes achingly longer than we were told it would take.

May I stop for a Steven Wright joke?

“I was ‘Caesarian’ born.  Can’t really tell, although whenever I leave a house, I go out through the window.”

You can buy lobsters bigger than that.

Anna and Baby Girl “Preemie” remain in the hospital.  I depart for Toronto.  I come back with a cold.  (Later diagnosed as a virus and a bacterial infection.  I do not know how anyone in Canada is still alive.)

Awaiting their new house to be completed, Anna and Colby and the growing (surging to five pounds) Baby Girl “Preemie” are staying with us.  Harboring lingering symptoms of my illnesses, when visiting her room, I am instructed to don a protective mask, and keep my distance from my new granddaughter.

Which seems to have turned out okay.

The preceding narrative is a thumbnail summary of recent events, for those who inquired about it.  And also those who did not.  (A recent addition to the family has not exonerated me from “the spectrum.”)

And now, it is with bursting enthusiasm that I introduce to you, and to the world… 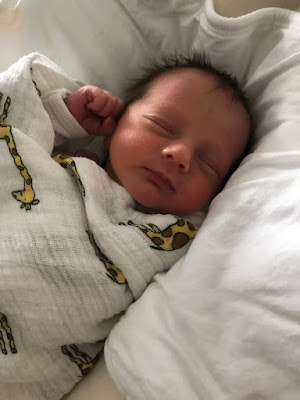 “She’s here to stay!
Oh what a lovely little baby
They’re gonna let me hold her, maybe
Hip, hip, hooray.”
Posted by Earl Pomerantz at 4:00 AM

Mazel tov! And welcome to Golda.
Love those chubby cheeks.

Welcome to this fascinating world, Golda.

Yes, she is! Congratulations.

congrats. Glad she made it through safely.

Yes I know it's Golda, but spell-check snuck one by me.

I'm glad to hear that everything turned out O.K. for little Golda. By the way, this is my first visit to your blog. Are they all this intense? I'm a regular reader of Ken Levine's blog. He suggested that "everyone" should read your blog. So, I thought I should check it out. I'll probably be back.