I look at the picture and see nothing.

But that does not mean it’s not there.

My daughter Anna took the picture on the bottom of this post, yours truly, chuffing tobaccolessly on her Father’s Day present, a spectacular, new corncob pipe.  (When she was a kid, Anna chewed the stem of my old corncob pipe shut and she was generously making amends, twenty-five years after the fact.)

Aesthetically, this would be the appropriate place to reveal the picture, but I can only attach pictures at the bottom of my posts so you will have to bounce down there, take a quick look at it and then bounce back to where you left off.

You know, I actually counted the dots to get the timing just right.  I think I nailed it.  No, wait.  The second one is too long.  Hold on.  I gotta fix it.

(* Denoting you holding on, not me shortening the dots.)

What do you see in that picture?  A kindly former Canadian who would not hurt a fly?  That’s exactly how I feel about me.  I’m the gentlest guy I ever met!

I walk up to a woman at an intersection at night...

And she reacts to me like I’m the “Skid Row Slasher.”

The proverbial – though anatomically impossible – “Jumping out of her skin.”

I immediately allay her concerns.

To no noticeable effect.  The light turns “Green” and she breaks for the other side of the intersection like she remembers me from an episode of Law & Order SVU.  Not the guy early on who appears to be guilty but isn’t.

I am the actual assailant!

(Forgetting that Law and Order is fictional and I’m real.)

I realize it’s upsetting having someone arrive unexpectedly in the dark.  I remember once someone racing up to me at night and I began immediately saying my prayers.  The man meant me no actual harm – he was simply in a late-night hurry.  But there was that reflexive reaction of “Lights out!”

Maybe it was like that for the frightened woman at the intersection.  Not that she intuited sinister intentions on my part.  She was probably just startled.

Worrying evidence in the opposite direction.

Shortly thereafter, following dinner at P.F. Chang’s with my friend Paul – have you ever seen one Chinese person eating at P.F. Chang’s?  It makes me question its authenticity – we call Uber * (* Umlaut unavailable on my keyboard) to shuttle us back home.  We have both had one drink and do not trust ourselves behind the wheel.  (Full Disclosure:  Most people do not trust me behind the wheel with no drinks.)

The arriving Uber is a mini-ish vehicle, leaving Paul taking the uncommodious back seat by himself, and me, occupying the passenger seat up front.

The driver flashes a furtive glance at me as I settle in.  And then, in a trembling voice he announces,

Banishing us from his vehicle

It was truly astonishing.  The guy checks me out for a mille-second...

And we are back on the street!

What are they noticing, these people I am frightening out of their wits?  Some subliminal signal warning:

“Run for your lives!”

I sincerely don’t get it.  I look in this picture and see a genuinely decent person with a spot in his face where the dermatologist took something off of it that turned out thankfully “Benign.”

Judging from the responses of that female pedestrian and that quivering Uber driver, however…

You see this picture?  What do you think?

Or a Jew with a pipe?

I need an outside opinion.  If I have misjudged myself, I have to know before running seriously amok.

We are the last ones to know. 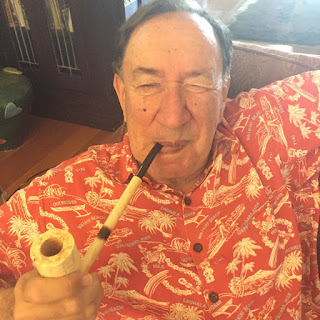 You've got a bit of a Gilbert Gottfried look going. Maybe that is the problem. It's his fault.

You look a little like Popeye in that picture. Could that be it? He may have been the hero in his films but when he was on spinach, watch out!

Or maybe you looked like you were about to let loose with a string a jokes and they just weren't in the mood.