"We Went To Turkey - Odds And Ends"

A Brief History Lesson:  After attaining independence from their post-World War I occupiers (Britain and France) and their proximate proxies (Armenia and Greece) in 1923, Turkey experienced a deliberate and seismic cultural transformation.

Turkey’s victorious secular leader Kemal Ataturk (which means “Father of the Turks”) issued an order, aimed at his country’s instant modernization, liberating it from 500 years of Ottoman acculturation, propelling it headlong it, as Ataturk believed was essential and necessary, into the Twentieth Century.

Ataturk ended the Sultanate rulership.  He outlawed the traditional Turkish wardrobe, including the fez as well as those baloonish (respectfully) gym pants.  Judging from Ataturk‘s clean-shaven likeness on the Turkish currency, he went aggressively after the mustaches as well.

Also out was the ubiquitous Arabic alphabet, ordered permanently replaced by the alphabet westerners use, with some minor adjustments so they could still spell their old words.  At that time, they also introduced English words, though they decided to spell them differently.  Not phonetically exactly, but, I guess, a transliteration, of what they heard.  As a result, what you end up with is English words, spelled in a somewhat fanciful manner.

You deposit your money in a Bankasi, order restaurant food from a menusu, and look at art in a galerisi.

You play tenis and basketbol.  Even their own country is not immune to this “ideosyncratic spelling” treatment.  I have two t-shirts, on the fronts of which is emblazoned the single word,

CONTEMPORARY TURK:  “Hey, it’s better than the Arabic Morse Code with eyebrows that we used to use.  That stuff was indecipherable.  Even to us.  By the way, are you sure we’re not spelling these English words right?”

It’s a different place.  And they spell things differently.  As long as they understand them, we can only take note and move on.  (And wonder, as I am sure immigrants to our country do why it’s “’I’ before ‘e’ except after ‘c’?”)

Irresistible Silliness.  (Not that the silliness is irresistible, it’s that I could not resist being silly.)

I would spot a couple visiting some touristical point of interest.  The man is taking a picture of whom I imagine is his wife.  The woman stands stiffly, trying futilely to relax.

Just as the man is about to snap the picture, I walk over and stand right next to the woman, smiling pleasantly (Think:  Alfred E. Newman-like) directly into the camera.  Sometimes, I feign draping my arm casually over the woman’s unguarded shoulder.

I pulled this stunt twice and was “two for two” in eliciting “outright prolonged laughter.”  Even from Asians.  I can imagine them sorting through their photographs when they get home:  “Who’s that?”  “It was that silly man, remember?”  And they chuckle happily at the recollection.

Ahhh, the lengths one goes to for the tenuous promise of immortality.

One:  I drove the boat.  I stood in front of that big-spoked wooden wheel and I steered the boat for close to half an hour, maneuvering at one point around a sailboat – the captain directed me to go around on the right, but I stubbornly went around on the left, and I made it, without mishap or difficulty.  Have you noticed I have chronicled this entire experience without using a single, technical boat word?  It’s amazing.  Being that ignorant.  Yet able to steer with such masterful command.

Two:  Once in Dublin, a Turkish barber gave me a superlative, straight razor shave.  I could not imagine the best Turkish barbers being in Ireland, so I decided to “top” that experience, engaging the services of a Turkish barber in Turkey.  (While visiting a picturesque beach town called Gocek.)

The shave was fast, and skillfully executed.  At the end, however, the accomplished Gocek barber threw in an unexpected touch, not included by his counterpart on the Emerald Isle.

As I sat comfortably in my chair, the Gocek barber set fire to a slender stick of cedar, and then, without fanfare or warning, he whisked the flaming stick around the periphery of my ears, singeing off my ear hair, and scaring me to death.

Rising from the chair, somewhat unsteadily, I  proceeded to pay him – adding an appreciative tip for not burning my face off –  and I left.  With a smooth shave, and the rejuvenated ears of a twelve year-old.

A trip – not the Hawaiian kind where you lie on a beach chair and wait for your massage appointment – but a sightseeing trip where you move around a lot – in our case, we started off in the Asian hotel, then moved to the European hotel, then to the boat, then on to the Kismet hotel and finally back to the European hotel – well, it reminded me of a canoe trip – an excursion filled with exhilarating adventures, but sporadically strenuous as well.

You are happy you went.

But you need to lie down.

Such was our rewarding and memorable vacation to Turkey.  I sincerely thank our traveling companions – Joan, David, Jane, Marvin and (the until now unmentioned but unforgettable) Marge.

Thanks also, and enormous appreciation to our tour guide Sarhan and the Hayalim-D’s captain and his exemplary crew.

And we will never forget the super-hospitable Cinar family, who treated us to a sumptuous banquet (including Raki, the traditional alcoholic beverage, an excessive consumption of which can make your bones feel like they are separating from your body.)

In a word – which I actually used when I thanked Joan and David for including us in their plans, the entire Turkish experience, top to bottom, was

We are old.  And we did something new.

How ‘bout that, huh? 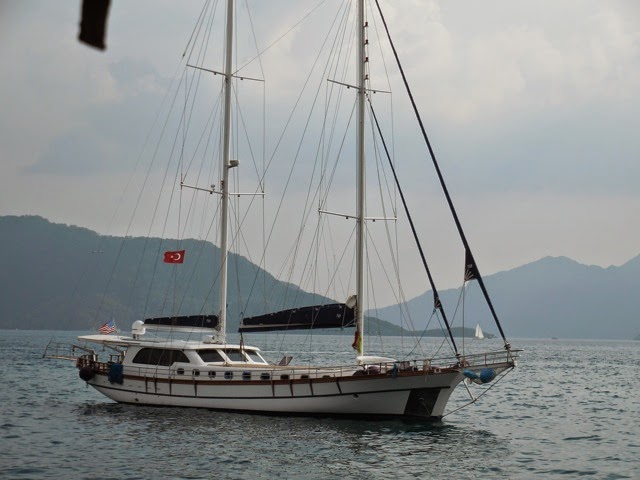 I admit, I visited this blog a few years back when Ken Levine gave a shout out but ultimately decided I don't have the time to follow two blogs of similar content. Now, revisiting because of the Cosby thing, I'm starting to regret it. The Turkey trip alone was a superb read, thanks a lot!