"It Was FunTill We Got Robbed"

Written the day after we returned from Hawaii.

Though not as shocking

“Aside from that, Mrs. Lincoln, what did you think of the play?”

“The first days on the Titanic were lovely but then this terrible thing happened”,

the story I am about to relate fits the same narrative template.

Though it’s more meaningful because it happened to me.

Actually to us, but, when possible, the missus likes to remain remotely out of the picture.  So it’s just me.  Even though it wasn’t just me.   It was just us.

Okay, so by “fits the same narrative template” I mean, like those well-known earlier examples, something happened on our recent trip to Hawaii that eclipsed all the other experiences.  So it’s like this:

“How was your trip?”

Their response is invariably – and sensibly –

That is simply the way it is.  You put “robbed” in your “Hawaiian Holiday” story and nobody wants to hear about going for “shaved ice.”

It’s the same in this venue.  One story hijacks all the attention.  I originally thought to begin by asking – I actually took notes in the air about this –

“Why is it I’ll eat anything on an airplane?”

That’s what they offered.

And I scarfed the thing down.

Though I am not crazy about corned beef – especially airplane corned beef – that sandwich was gone in startlingly few moments.  And I immediately – actually while I was swallowing it – asked myself, “Why?”

The reason came down to either, “Because it was free” (ignoring the price of the air ticket) or, “When there is the chance you’ll be plummeting out of the sky who cares about ‘Nutritional Guidelines’?”

Because I got robbed.

I took notes on visiting a local museum one rainy afternoon, the museum complaining,

“Where are you when it’s not raining?”

Because I got robbed.

Also – because the thing we do most in Hawaii is nothing – specifically, “nothing” at the beach – I thought of confessing that, as I get older, I find I cannot do as much “nothing” as I used to do – I can handle a morning of “nothing”, but then I have to go upstairs and take a nap.

Whimsical to a fare-thee-well, this now appears.

Then there’s this remarkable thing about Hawaii, that no matter how hot and humid it gets, you feel this compensating wind, like there’s a big fan somewhere, cooling all the people on the island.

But I got frickin’ robbed!!!

Therefore, instead of this idyllic picture, capsulizing the holiday, 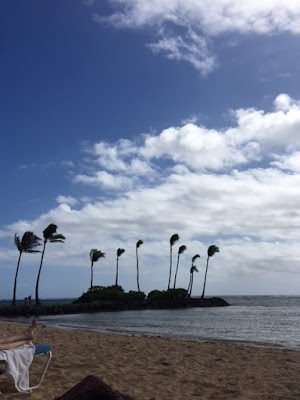 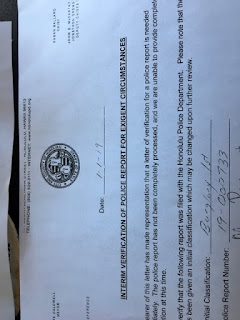 You have to swivel your head to read it.  In case you don't want to, it's a police report.

With the related story to come.

Because I am too jumpy and angry for readable writing.
Posted by Earl Pomerantz at 4:00 AM

I remember that happened to us on a trip to California. Of course, I was young, and the trip was fun. We stopped in Berkley, and walked around the UC campus and the streets of the college town. When we go to our next stop, we found all our suitcases were taken.