It's my daughter's birthday today.

She is my sunshine, my only sunshine.

In all these years, we have never had one serious dispute.  Except when she said, as a teenager, "Dad, I'm funnier than you and I have been for years."  But as I said, she was a teenager.  Later on, she eventually came to her senses.

And now, she's a mother.

My daughter's a mother.

There's a "Wake-Up Call" if ever I heard one.

And you know what?

Which comes as somewhat of a surprise.  At children's birthday parties, her sister Rachel was the one who wanted to hold the babies.  Anna was more interested in monitoring the presents.

I am not prone to public displays of personal affection.  People I love know I love them without me blubbering about it to strangers.

So I shall leave it at that.

And now, in honor of this birthday milestone, I offer the gift that arrived between birthdays.

Presenting, the most recent "Golda-Gram."

I hope she appreciates her mother.

You still make me happy when skies are grape.  (Which is how she sang it when she was little.  And she knew it was funny, judging by the telltale glint in her three-year-old eye.)

And now... for your accumulating collection:

A sparkling subsidiary to the sun. 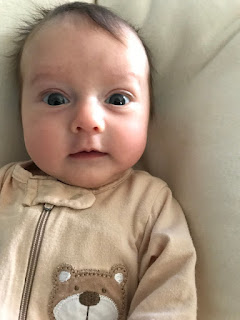 Posted by Earl Pomerantz at 4:30 AM

Happy Birthday, Anna! I'll stop before I sing "Sunrise Sunset." Congrats to her great parents, too.