"How Not To Be Helpful On Thanksgiving - A User's Manual"

Written the morning after Thanksgiving…

In the past, I have mentioned our bodywork specialist whom I call “The Horse Doctor” because he works three days a week on horses.  In his less reputable days, Dean, formerly an L.A. police officer who still teaches self-defense to LAPD “SWAT” teams, was an active gang member in whatever “mean streets” exist in New Jersey.

When I once asked him how, with no formal training whatsoever, he had learned his restorative bodywork techniques, Dean explained that his process is simply the opposite of the strategy he practiced during his gangbanging days.  Now it’s “How can I fix that?”  Then it was, “How can I cause that?”

Thanksgiving morning during my meditation, I decided to be as helpful as I possibly could in preparation for the upcoming festivities.   Since, you know, nobody believes they are deliberately unhelpful – the way no one admits to deliberately evil –

“Am I deliberately evil?  I would say ‘No.’  I am good, with inadvertently evil consequences.”

I thought I was always helpful at Thanksgiving.  I served as the genial host entertaining the company, while other people (primarily Dr. M and daughter Anna) did everything else.  It seemed like an equitable division of labor.  I am a really good host.

Just in case, however, I decided to do more.  And, in order to be helpful – which I believed I already was and had therefore no distinct understanding as to what to do differently – I decided, ala Dean, to deconstruct my previous behavior and do exactly the opposite.

What results is a list entitled, “How Not To Be Helpful On Thanksgiving.”  Although I sincerely believe… never mind.  I am trying to be constructive.  (Along Those Lines:  This list was prepared to alert me to doing the opposite.  If you think, however, that you may have in the past been overly helpful on Thanksgiving, this list can be a useful directive, offering practical suggestions for doing less.  A list with two purposes – That’s quite a list.)
Okay, here we go.

How Not To Be Helpful On Thanksgiving:

When asked to assist with some preparatory chore, always respond in a tone suggesting that you would much rather watch football.  Cooperation, I believe, requires total honesty.  It is essential to know exactly who you’re working with.

Take your time before beginning that assignment, in hopes they will eventually forget they asked you and either do it themselves or find somebody else to do it, anyone, Lord knows, being more capable handling virtually kitchen-related activity than I am.  I say, if you want something done right, ask the best person available, not someone who just happens to be lying around, watching football.  Not being lazy.  It’s just simple, common sense.

When nosing around the “Command Center”, offer a superior alternative for accomplishing whatever task they are engaged in.  Then casually wander away, knowing you have saved precious time, upgrading their efficiency.

Express genuine concern about why everything’s taking so long.  And if you discover that a mistake has been made – like the cranberries had to be redone because the original batch was inedible – call them unmercifully on it, thus providing them the opportunity to purge themselves of their guilt, allowing them, their consciences now clear, to proceed unburdened to their other responsibilities.

Staving off subsequent embarrassment, wonder out loud if they have prepared enough food.  If they are particularly low on, say, stuffing, scoop up a big handful of it before heading away, thus requiring them, against their wishes, to prepare more.

Check out the carefully planned seating arrangement, enabling a salvaging “Heads Up” to an impending catastrophe.  (Wait.  How could anyone say that’s unhelpful?)

If numerous children are invited, bring up, as a cautionary reminder, that one of them is believed to have head lice.

When asked to slip out to the supermarket for some forgotten ingredient, always ask, “Do we really need that?”  They will thank you when your services are suddenly needed at home and you’re not off on some ridiculous wild goose chase.

Never be proactive in any way.  Resist the impulse to spontaneously jump in, for fear of throwing a monkey wrench into a highly functioning, well-oiled machine.

Monitor food smells emanating from the kitchen, averting the telltale inclusion of cumin, which a lot of people don’t like.

When you see somebody struggling with a gigantic pot of boiling water, go up and give that person a hug.  Do not be deterred by their resistance.  Some people are embarrassed by overt displays of public affection.

At the “Toast of Appreciation”, begin the acknowledgements by announcing that you yourself peeled two potatoes, adding facetiously that “Other people helped too.”  Your co-co-workers will love it, playing along with the hilarity by pretending they don’t.

During after-dinner “cleanup”, stay completely out of the way.  Even moderate alcohol consumption can be imperiling to delicate stemware.

If you turn out the lights in the kitchen while someone is still doing the dishes, explain that you neglected to see them them because your primary consideration was saving electricity.

Expect no thanks for your participation.  Though, to spare their embarrassment concerning that oversight – they’re exhausted and they forget things – casually remind them of your essential contribution.

And there you have it.  Now all that’s required is to take this “List of Unhelpfulness” and simply turn it on its head.  Try it.  Even if you believe you have been helpful all along.

But you know what?  That’s fine.

I’m going to be helpful again. 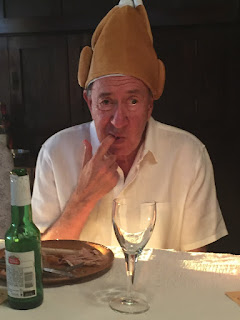