This spontaneous tribute to my roots sprung to mind at the L.A. airport, prior to our departure for Toronto, which was what I believed at the time it was referring to.  However, with the tune reverberating ever more forcefully in my ear, as my brother chauffeured his spouse, my spouse and myself straight North from the metropolitan area of my birth, it was revealed that “home”, in reality, meant something uniquely and generically different.

“Home” meant the rough and untrammeled heartland of Canada, the real Canada, the Canada where, as my brother insightfully observed,

“Nature is the show.”

Dr. M had shown me Michiana, where she had spent many youthful vacations.  I wanted to show her Northern Ontario.  Not to prove it was better, but to introduce her to the essential magnificence of my Home and Native Land.

Driving North in Ontario means not only driving up (in a northerly direction) but also driving up (as in higher in elevation.)  As we proceeded northward, “out the window” became more and increasingly beautiful.

Up we went, from flattened farmland, to gently rolling hills, to a highway cutting through blackened boulders bracketing the roadway, to, finally, the forests.

“I’m goin’ home
To the Trees and Waters…”

Waters “to come.”  But first, the trees.

The Michiana trees seem primordially majestic.  Till you see Canadian trees.  The Michiana trees, it has been suggested, are the products of an intentional re-forestation.  Canadian trees have been there from the get-go.  These are the country’s true Original Inhabitants – the poplars, the pines, the birches, the firs.  Rising to the sky, a hundred feet in the air.  Or thereabouts.
Canadian trees have seen it all.  They are so old they remember the last time the Leafs won the Stanley Cup.  (The L.A. Kings won two years ago.  I‘m just sayin’.)

And there they are, standing stoically, telling their story to those any who would stop and listen:

“Once, it was just trees.  And a few animals.  Then came the Trees That Moved – perhaps an inaccurate description but in the world we live in, everything is a tree.  The Trees That Moved wore feathers on their heads.  We knew not where they had come from, though the more learned of us believe it was Asia.

The Trees With Feathers on their Heads chopped us down, making strange crafts that would float them across the waters.  Mostly, they used birch trees for this purpose.  We were sad for our Brothers the Birch, but not devastated, because we were not a birch.

But you know what they say:

“First they came for the birch.  But I wasn’t a birch…”

And so exactly did it transpire.

We tried to oppose such devastation, but there is only so much a tree can do.  Sometimes, lighting struck one of us and we would fall down on somebody.  We hoped they would learn from that that we were angry.  But they considered it an accident, and they continued chopping us down.”

There is, of course, more to the story.  But we only had so much time, and how long can you stand listening to a tree?

I’m going to jump around here, because I have a picture.

One of the highlights of our Northern Ontario Adventure was a place my brother took us to called “Ragged Falls”, in Algonquin Provincial Park, where, as I camper, I was taken on canoe trips.

Algonquin Park is a pure and pristine tripping and camping preserve.  No hunting.  No fishing.  No unpleasant Deliverance shenanigans.  You cooked your food, and you slept under the stars, (or in a tent sprayed emphysemically with mosquito repellent.)  Biggest Excitement?  A bear eats your salami (not a euphemism.)  At night, black bears sometimes roamed into our campsite, gnawing away at yard-long salamis hanging from trees.  (We’re not talking a “Salami Tree” here.  It was a single salami we had brought out from camp, and had hung (carelessly) from a tree.

To reach “Ragged Falls” you hiked up a footpath for about half a mile, hearing the raging waters before actually seeing them.  Then, if you are brave – or if your older brother shames you into it – you step carefully onto the sharp and slippery rocks, searching for footholds on your way to a perch at the center of the roiling turbulence cascading around you. 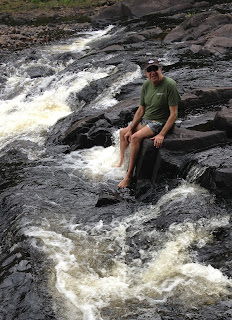