Yesterday, I had a small “Crisis Moment” where I was confronted with a seriously faulty recollection process. I decided there’s not much I can do about that, except, maybe, seek confirmation on the matter from others who were involved, but that’s tricky, because their memories may be faulty as well, possibly in an entirely different direction. I guess the best you can do is the best you can do. There was an old-time umpire who said, “I never called one wrong in my heart.” That pretty much covers it. So on we go. 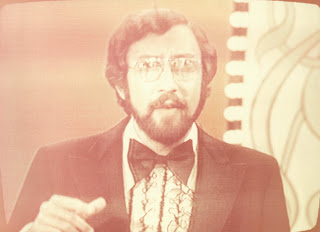 I am not prone to vanity, but I have to say,

“That is one fine-looking beard.”

This picture was taken through a television set during my performance on The Bobbie Gentry Show, in 1974. I mean, yeah, being prepared for a television appearance, I had professional help sprucing it up, but generically, though I admit prejudice, we’re looking at a beard that really works!

(Full Disclosure: The photo appended to my permanent resident “Green Card” displays a scraggly beard of a fellow I’d be reluctant to sit beside on an airplane.)

Why did I have a beard at all?

I have no idea.

Some possible explanations: My brother had a beard at some point, and I wanted to be like him. Although his was a goatee, and mine was a “wraparound.” (Which I believe is better. But that too may be subjective.) Also, though it was ’74, there was still spillover from the hair-hoarding sixties, where barbers read the paper for ten years until their customers came back.

The sixties produced a follicular rebellion against the “brush cut” fifties, where they cut hair like it was still World War II, and you were trying to avoid getting head lice in the foxholes. I was probably just following the trend. Before that, the only people I met with beards were impoverished Hasidic rabbis who came to our door and tried selling us buttons.

There’s another issue as well. Going sideways for a minute, when I was 16, and a Counselor-In-Training at Camp Ogama, there was a rule that you could smoke, if you got a signed permission slip from your parents. In my cabin of eight campers, the only one who got permission to smoke was me. And I didn’t even want to smoke.

But my mother was always prodding me to “Grow up”, and, back then, smoking was believed to be an integral part of that process. So she signed the paper, and I bought a pipe.

In truth, I still didn’t do much smoking, since, due to my inept packing of the bowl, my pipe kept going out. The result was pretty much a pacifier, with tobacco.

But I was sending a signal: (call it a smoke signal)

“Grownups smoke. I smoke. I am a grownup.”

I imagine there are similarities with the beard.

Logic, it would appear, has its limitations. Closer to the truth was that I was a child with a beard, who smoked.

Hair decoration was a fashion statement, not unlike the, more recent, body piercing and tattooing, but you didn’t have to go to anybody, the hair just showed up. Facial hair could, in fact, give shape to your not as yet fully formed physiognomy. On the down side, if it was not assiduously trimmed, you’d be chewing on your mustache, and finding dinner residue in your beard.

During my first year in L.A., somebody told me that it would take three years to feel fully at home there. They were almost dead on. Three years after I arrived, my career was established, I met Dr. M, and my actual grown up life began to take shape.

And that’s when it hit me. My “Beard Time” was over.

Since my debacle of yesterday, I will not even guess at when I shaved the beard off. I only recall that at some point, the beard became, to my thinking, a concealing disguise, a prop I was hiding behind, because I was not fully comfortable with where – and also perhaps who – I was.

Suddenly, I was consumed with this mental image of a man, walking around Los Angeles, wearing a fake beard that hooked over the tops of his ears. My facial covering no longer seemed like an organic part of me. There was this insistent urge to slip it off, and reveal my true self to the world.

On the practical side, it was probably summer, and the beard was making me itchy.

I accomplished it in stages. First, I shaved off the “connecting area”, leaving a goatee and long sideburns. I tried making the sideburns even, but, being me, one side was always noticeably shorter than the other, until, after evening one side and then the other, there were no sideburns left. I’d have kept going but my actual head hair yelled, “Stop!”

What remained now was the beard. But I looked like I was swallowing a muskrat. So I shaved off the bottom part, and for a short time – I believe a couple of hours – I had only a mustache. That was just ridiculous. Dr. M said I looked “furtive.”

And then it was all gone. I was now returned to my original condition. I looked younger. Cleaner. I became reacquainted with my chin. The madness had ended. I was truly myself. A grownup with no beard who didn’t smoke.

Which is apparently part of being truly myself.

Dear Mr. Pomerantz; if you mean to say that being like a sex year old is your normal state, I'll say that it's a good thing. Your expression in the photo taken of you in front of Mt. Kilimanjaro shows a the glee of six year old at doing something really fun. That you can find such delight as an adult is in your favour.

Earl, maybe you never had a beard.
That looks like James L. Brooks from the MTM Show years.

Good story about the things we do to look grown up.