"Two Stories About Monkeys, A Cultural Insight And An Epilogue" 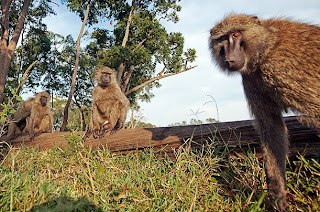 CAUTION: YOU ARE LIKELY TO MEET DANGEROUS WILD ANIMALS ON THIS TRAIL. PLEASE PROCEED QUIETLY AND WITH CAUTION. YOU PROCEED AT YOUR OWN RISK. THE NATIONAL PARK ARE (sic) NOT RESPONSIBLE FOR ANY EVENTUALITY.

We thought they were kidding. A scary sign to give tourists a story to tell:

“They told us it was dangerous, but we took the trail anyway.”

Our guide assured us it was okay. He informed us that, if we wanted to see “the big crocs”, we should hike down to the river about a quarter of a mile away. He’d take a “cigarette break” at the minivan, and we’d reassemble there when we got back. We said, “Fine”, and off we went.

They told us it was dangerous, but we took the trail anyway.

We hiked down to the river. We saw some pretty big crocs. We watched them for a while, and then, after about ten minutes – I mean, they weren’t doing tricks or anything – we got bored, and we headed back.

Halfway up the trail, we were confronted by a substantial pack – there were at least a dozen of them – of rather serious-looking baboons, who were gathered, and apparently comfortably settled, in the middle of the path. The gathering was blocking our way out. There was no way we could get by. Without passing directly through the baboons.

It was then that we had second thoughts about the sign.

Dr. M did not want to disturb the animals, lest, by disturbing them, we would upset them, and they would gang up on us, and, working in concert – a baboon mob as it were – they would tear us to pieces. Her position was to wait until they left of their own accord, or until our guide came down to find out what had happened to us.

My “Ape Man” impulses, however, had other plans. Despite Dr. M’s (reasonable) protestations, I proceeded forward, wading straight into this feral gathering, shouting “Bundolo! Kreegah!” and other commands I remembered Tarzan using when going toe-to-toe with various murderous beasts of the jungle.

The baboons parted like the Red Sea – if the Red Sea had had orange fur, sharp teeth and pointy nails – and I passed right through. If you don’t believe me, we have a photograph in our album, taken by me, safely on the “other side”, showing Dr. M, cowering about thirty feet down the trail, with the pack of baboons in between.

It really happened. I have the picture to prove it.

An Even Better Monkey Story

We have returned from our morning “Animal Sighting”, and we decide to enjoy a cold drink on the terrace behind the lodge. We notice, with amusement, that, about twenty or so yards below us, a woman was desperately grappling with an agitated monkey. We were glad it wasn’t us.

And then, suddenly, it was.

The monkey skittered up to where we about to sit down, and immediately grabbed Dr. M’s purse, containing her passport, her money and her personal I.D. (Items it would not be good to have carried off into the wild, and lost.)

Dr. M reached for her purse, and a tug of war ensued, culminating in Dr. M’s losing her footing, and slipping to the ground. For a moment I stood there, frozen. Then, entirely reflexively, I exploded into action.

Having no desire to engage in hand-to-hand combat with an agitated monkey, I picked up a nearby chair, and, holding it in front of me with both hands, I proceeded to fend him off, by continually jabbing the chair towards the animal’s face.

I fought off the screeching primate, defending my fallen mate for what felt like ten minutes, but could actually have been one. At that point, reinforcements arrived in the form of hotel personnel who had noticed our plight and had raced to the rescue. But there was no need for rescue. The matter was entirely under control. And I didn’t even need “Tarzan noises.”

Though I did need a beer. And a long, normal pulse-rate-restoring nap.

As we drove along, I inquired of our guide Patrick if he did anything else besides taking out tours. Patrick revealed that he supplemented his meager stipend as a tour guide by selling the fruits and vegetables that he grew on his tiny, four-acre farm. He asked me how many acres I had. I replied that I had no acres.

Patrick shot me a look of absolute bewilderment. The contradiction baffled him. How could a person with no acres afford to take himself and his lady on a luxurious photographic safari to Kenya? It was a “learning moment” for both of us. My “land poor” revelation cast an illuminating light on the issue of relative wealth.

From then on, Patrick’s demeanor left the impression that he truly felt sorry for me. Though this did not stop him from angling for a very large tip at the end of the tour.

When we flew back from Nairobi and landed in London, I suffered the jarring culture shock memorably depicted in Tarzan’s New York Adventure. (And why not? I had behaved like Tarzan. Why shouldn’t I react like him upon entering a teeming, noisy metropolis. Known as “civilization.”) On the ride through this startlingly contrasting terrain, I was stricken with an agonizing, doubling-over stomachache.

Later, when I had sufficiently adjusted to my environment, we visited a high-powered theatrical agent named Dennis Sellinger, who had arranged, as a favor to my American agent, to provide us with theater tickets for the plays we’d requested to see during our three-day London stopover before flying home.

After telling us a hilarious story about his then client, Peter Sellers – which I’ve related before, but will repeat upon request – Mr. Sellinger informed us of some “good news.” ABC had placed Best of the West on its fall scheduled. The show would appear Thursdays at eight-thirty, after Mork and Mindy.

This is true, though for regular readers, that should go without saying. Though I’d been immersed Best of the West for almost two years, and had anxiously waited out the determination of its fate, having experienced the magic of the past two weeks – luxuriating in the Seychelles, and snapping photos of the animals in their natural habitats – I reacted to the career news Mr. Sellinger passed along with a feeling of

It just didn’t seem to matter.

I don't know why that monkey attack story is so damn funny, maybe because it didn't happen
to me.
Hats off to you for confronting baboons though, I definitely would have waited until they'd died of old age. Or I did. The one on the right looks like one mean mother.

Excellent stories, all. Let's get a cold beer now!

Monkey Business
Once upon a time, a neighbour of ours loaded up his new station wagon with his wife and kids and headed out to the "African Lion Safari" near Hamilton.
In those days, you could choose to venture through the 'park' on a special bus or, having been warned to keep your windows tightly shut, just join the chain of cars following a designated pathway winding through the 'wilderness'. (I think you now have to get on the park bus....and this event may be the reason why).
He chose to drive his shiny new wagon loaded with kiddies through the barrier gate for a more comfortable journey.
Within moments, a gang of baboons leaped onto the hood of his car and proceeded to re-enact the rumble scene from West Side Story. Two males tore at each other, limb from limb, as they say, wiping his windshield with blood and gore. He couldn't move, sandwiched as he was between the other vehicles in the line.
His kids were hysterical and, no doubt, permanently traumatized. He and his wife were not pleased.
He did not get a refund. Or even the offer of a car wash.

You should post that picture of the parted baboons.