Deprive me of “Piano Privileges”, if you must.  Accuse us of “Stealth Smokerism”, if you dare.  Despite niggling quibbles – the Dining Hall chairs get increasingly uncomfortable as I get older – for me, Rancho La Puerta remains “The Happiest Place on Earth.”  (That doesn’t have “Pirates of the Caribbean” and “Animatronic Abe Lincoln.”  But, you know… they’re different.)

Two Reasons I Love Coming Here:  The people, and the place.

That would not be the last or the creakiest joke he would bestow upon us that week.

But he told them all with a twinkle.

Two women, working individually in the Lounge, assembled a one thousand-piece jigsaw puzzle in three days.  Three days was how long it took me to discover the location of the oatmeal.

I learned of a woman whose next visit to the Ranch would be her one hundredth.  (As opposed to my 37th, but who’s competing?)  When exactly did she start coming?  I imagine her standing outside, waiting for them to finish it, and when she stepped in for the first time, she said,

A visitor from Denver, claiming his wife was the “Biggest ‘Foodie’ in the world”, backed up that trumpeting assertion, revealing,

“We once flew to Portland for donuts.”

And then, there was the woman who almost killed me on a hike.

Let me record this “Pithy Aphorism”, before forgetting what it is.

What was it, again?

“There is a thin line between courtesy and dying.”

Stitch that on a pillow, and commit it to memory.

At the ten or so minute mark of the morning “Woodland Hike”, Jean came up from behind me, immediately bombarding me with questions.

I thought she was a reporter.

From The Hiker’s Tribune.

Here’s the thing, though.  I lack a memorable aphorism to easily embed it into memory, so I’ll just say it “regular.”

Quite often, people who start out bombarding you with questions are, in fact, merely setting you up.

When you eventually reciprocate, asking them a question – “Snap!”, the sound of an animal, caught in a trap – that is exactly what they’ve been waiting for.

From then on, they proceed to “Command the Floor.”

I can’t tell you how many interesting factoids I learned about Jean.  Which is not the problem.  I myself have been known to reveal information on one’s dying to hear.

Ah, I see “Blue Italics Person” is along for the ride.

The problem was, while Jean – Or was it Jane? – No, it was Jean – went on, chronicling her mu-traveled biography – San Clemente, to Stanford University, to Ohio, to her current home in Charlotte, North Carolina – she proceeded at faster pace than a seventy-three year-old man with “heart issues” was able to comfortably keep up with.

Because I did not want to be rude.

What was I going to tell her?

“I’d love to talk to you.  But at this pace, I won’t make it to breakfast”?
I had no choice but to match Jean stride for stride.  Till…

A CONCERNED JEAN:  “Do I need to call someone?”

My heart pounded like an Apache drumbeat before the attack.  I huffed and puffed like superannuated steam engine.  Once, on an upgrading portion of the trail, when required to respond – and this is as close as I came to alerting her to my distress – I said,

“I’ll tell you when we are going downhill.”

The woman never got the hint.

The single “upside” of this harrowing experience?

I finished the “Woodlands Hike” in record time.

I met lots of interesting people during our week at the Ranch.  Way more than I ever encounter at home.  By which I do not mean Los Angeles.  I mean my actual home where I spend the majority of my time.  Housekeeper.  Letter carrier.  That’s it.  (The UPS Person rings the bell, and takes off.)

That’s what I get, visiting the Ranch.  Mixing it up with a hair stylist from Berkeley.  Learning “What’s a tajine?” from a restauranteur from Aspen.

And when I am not talking to people…

At the natural viewscapes, like the picture at the bottom.

(Taken on the “Woodland Hike” by Myra Pomerantz.)

Why do I come back?

Oh yeah.  And the hammocks.

All they have to do is rethink the laminated notice on the Steinway.

And it’ll be perfect. 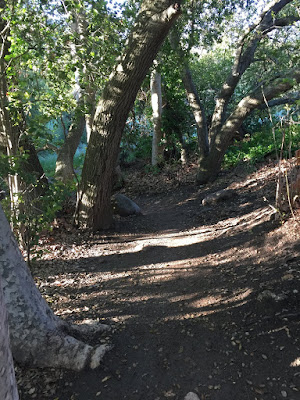 Next time, just bring your own keyboard and you might enjoy that walk on the wild side.