"The Oxford Experience - Chronicling A Dream"

A hired driver (a capable Bulgarian named Basi) conveyed me from London to the city of Oxford, parked by Tom Gate, the main entrance to Christ Church college, got out to make sure it was the right place, returned to the car and said, “We’re here.”  He unloaded my luggage, and drove away.

And there I stood.

And the University of Oxford.

(Contextual Footnote: The University of Oxfordis made up of 38 separate and distinct colleges. The college I’dbe attending, Christ Church college, was built – though probably not alone – by Cardinal Wolsey, in 1546.  Which makes it a “medium-old college.”  Colleges such as Balliol college date back to 1263, earning it the right to call the comparative latecomer Christ Churchcollege, “Sonny.”)

I “cobblestone” my suitcase through Tom Gate, where I am instructed where to check in.  (Chronological Note:  Dr. M’s class “Five Hundred Years of English Gardening”, had occurred during “Week One” of the six-week “Oxford Experience” schedule. {Pronounced:  “Shedule.”}  Myclass – “Political Thinking in the Twentieth Century”, slated for “Week Two” of the festivities, meant that I was there on my own, andI had the helpful advantage of being clued in by a Week One “graduate” on the appropriate procedures, thereby not entirely “flying blind.”)

My assigned room was on the Fourth Floor (which, in England, is, in reality, the
Fifth Bloor, the FirstFloor located one upfrom the “Ground Floor.”  I had read there were no elevators.  So , adopting my patented “Whiney-Entitlement Mode”, I complain,

“My wife got the FirstFloor last week.  Do you like her better?”

(Later that day, I encounter a sprightly 86 year-old woman who, when I inquire, reveals that her room was on the Fourth Floor.  Had she been assigned my original accommodation?  Not necessarily, I’d like to believe.  Besides, did I not say she was sprightly?)

I shall spare you the description of my dorm room, other than to say it was larger and more comfortable than I had anticipated, owing, I imagine, to numerous refurbishings since 1546. (I especially appreciated the indoor toilet.)


My only other dorm room experience was at UCLA, attending the Bertolt Brecht Summer Theater Workshopin 1966.  My Oxford room was practically palatial by comparison to that one.  Plus, assigned to the “Meadow” dorm complex, my large openable windows, offered a landscape-painting-worthy view – Duh! – of an idyllic meadow.  (There had been modern residential additions to the college, I later discovered, another “blot to perfection” I had fortuitously dodged.)

Plus, again – and I learned this was not true of all rooms – my “digs” was supplied with a fan, necessary for the protracted and stifling English heat wave.

A First Floor “Meadow” room with a fan?

After unpacking, I take off to check out the terrain.

And here’s where I run into trouble.  From a personal chronicling standpoint.

Taking in where I’d arrived and would remain for a week,

I found myself literarily speechless.

The English have a slang descriptive of this phenomenon:

I was totally and inescapably “gobsmacked.”

For the first two days, I made no entries in my omnipresent “pocket” notebook whatsoever.  My pen was literally struck dumb by “Look where I am!”

Towers, spires, domes, weather-beaten walls, forbidding iron gates and heavy oaken doors barring unlawful entry, surrounded by… you know, like, those teeth you carve on Halloween pumpkins? – They go up, across and down and then there’s a space and then there’s another tooth and then a space and then another tooth and then another space? The entire Christ Churchroofline bordering the “quad” on four sides was etched with Halloween pumpkin or, more evocatively, medieval-castle-like teeth.

Impregnable.  Which is good.  Because during the English Civil War (1642-1651), a fleeing King Charles the First had escaped London, living exiled at Christ Churchffor four years.

Possibly in my room!

Those thick walls and powerful doors probably saved him.  Until they chopped off his head in 1649.  But that was because he left Christ Church’s protection in 1646.  If he’d have stayed put, he might have survived well into the 1650’s.

One picture, and then I’ll stop hyperventilating until tomorrow.

One day during the week, each visiting student is invited to attend “High Table” in the magnificent “Great Hall.”  (Jacket and tie, required.  Though there was no mention about socks.)  “High Table” is like the Head Table at a wedding, elevated and perpendicular to long rows of tables below, in a vast and sumptuous dining room where we ate all of our meals.

And you know where that was?

They shot the movie right in that dining room.  (Later constructing a duplicate “Great Hall” on the Harry Potter soundstage.)

Do you see Earlo Pomerantz in the middle, wearing a light summer sports jacket?
It’s like Where’s Waldo.  Hundreds of people.  And somewhere, there’s me.

I still can’t believe I ate there.

I just wish I had the words to adequately describe my reaction.

Though their unavailability may exactly be the point.

I will settle for “gobsmacked.”

And show you the picture. 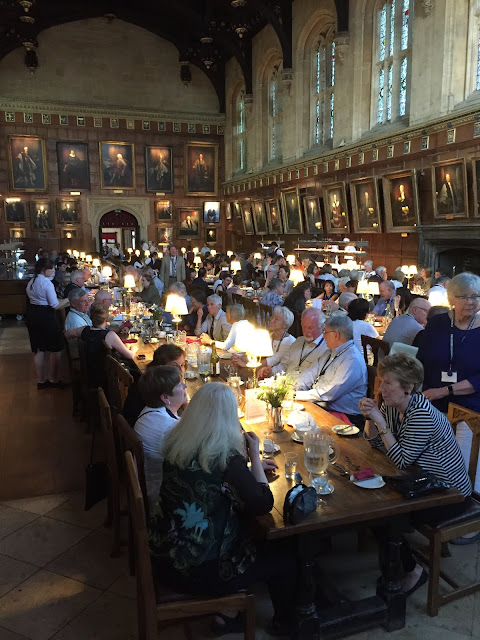 Some years ago, I attended a small conference at Oxford. I didn't think much about the location, just went to the address they gave. Until: they told us we could walk on the quad during the lunch break. Walking toward the lawn, I saw a sign: Balliol College. "This is the lawn where Lord Peter Wimsey was invariably to be found laying down the law to some unfortunate undergraduate." !!

Did you watch Inspector Morse and later Inspector Lewis which took place in Oxford? We enjoyed those shows and really liked when the action took place in one of the colleges at Oxford. But I never realized there were so many. I thought there were just a few. You've made me appreciate the history that happened there and continues to happen. I wonder how they keep it thriving over the centuries? There must have been a lot of change over the years - always with someone saying, "It will never be the same."

I was in Oxford for the first time in April. I went to see the Great Hall in Christ Church, since I’m a huge Potter fan, but they were asking about $10 admission fees to enter. It wasn’t worth it to me, so I went to see a movie. I was really early, so I crossed the street to check out the older buildings there and, lo and behold, there was the blue door to Balliol. I was a Peter Wimsey fan long before I was a Potter fan, so coming upon that by accident was a huge thrill.

But that whole place is fabulous. I hope you enjoyed your trip, and I can’t wait to hear all about it.

JED: the same way Harvard does. You train enough future ministers and prime ministers, and they look after you. :)