While engaging in this daily literary exercise, I am continually encouraged by a scene in the remarkable – to me – movie All That Jazz (1979), in which director/choreographer “Joe Gideon”, surrogating All That Jazz’s director/choreographer Bob Fosse, unveils his brilliant creation for a television airline commercial, which is ultimately rejected because it was not “sexy” but was, instead, actually sexy.

Inspired by that memorable example, I have struggled to provide these posts with not just the chronicling “It”, but in some manner or other, elevatingly “It”-Plus.  I don’t always succeed, but that motivating intention is always somewhere in my mind. Before setting fingers to keyboard, I await the perfect example.  The quintessential analogy.  The most resonating comparison.

I toldyou.  I don’t always succeed.

But this time, I believe I’ve nailed it.

Though, as you will shortly discover, that “nailing’” comes with a revelatory price tag.

Have you ever noticed that actors – of both genders, and likely the newly minted categories as well – admit to enjoying playing the villains more than they do playing the “Good Guys”?

This thespianical preference is easily explainable.  The “Good Guy”, definitionally, does good.  Such selfless actions may involve personal courage.  But, from a behavioral standpoint, that’s exactly was you’re supposed to do.

You fill out a questionnaire:

“Is it preferable to do good or do bad?”

“Is that the best question you’ve got?”

“Momma always taught me to do good.”

“Doing bad” – the questionnaire’s troubling “wrong answer” – is more complicated, and consequently more interesting to delve into.  Immersed in the “Bad Guy” perspective, the question, “Why would my character do that?” is psychologically fascinating. That question – for good reason – is rarely scrupulously explored in the other direction.

“GOOD GUY” PROTAGONIST:  “You do good because it is the right thing to do.  Having thoroughly vetted my character’s ‘motivation’, I shall now go to my trailer and take a nap.”

By diametrical contrast, the “Bad Guy...”, as with “Each unhappy family is unhappy in its own way”…

For an unpopular personal perspective.

Which is the following:

“Bad Guys” – fictional and otherwise – do not believe they are bad guys.

It is others – most prominently their victims – who angrily – and vindictively, according to the defendants – paint them with an indelible “Bad Guy” stigmatization.

The actual “Bad Guys” themselves?

“Bad Guys” variously see themselves as imaginatively “ahead of my time.”  Or as “takers” who believe “You either ‘take’ or ‘get taken’.”  Or they are blithely oblivious to the consequences of their actions.   Or they are “culturally misunderstood”, awaiting the more generous verdict of “history”.   (See: “Jesse James robbed the railroads for robbing ordinary people.”  Which, as a rationale, seems, to me, egregiously self-serving.  What happened to “an angry letter to Congress?”  That works, doesn’t it?  And does not involve shooting the guards.)

I deliberately “buried my lead” in the previous paragraph, as a temporary “stalling” technique.  It is now time to belatedly “face the music.”

The Condensed Version of the Story…

After 26 years of dutiful service, it became necessary to resurface the bottom (and adjoining sides) of our backyard swimming pool.  People were cutting their feet on the deteriorating original surface; plus, there was a detected leak in our hot tub.

So we emptied the pool and prepared for the refurbishing.

Days after the water was pumped out, a team of workpeople arrived, after which, for the next five consecutive hours, there was this hellacious jackhammering, emanating poundingly from our backyard.

It was extremely loud. So loud, in fact, that a friend living a block-and-a-half away called, asking, “Is that you?” and I was compelled to confess it was.

Available Excuses For Our Noisy Behavior:

- This was a one-time intrusion, after years of dependable “pool silence.”

- We were not told when the contracted repair process would begin.  (Keeping us from alerting affected neighbors in advance.)

- We did not know what was procedurally involvedin refurbishing our pool. (Leaving us unaware of the coming intolerable racket.)

- We wet told how long that intolerable racket would last.

- No one experienced the intolerable racket more agonizingly than we did.

We are genuinely good people.

Or so we believed.

The next day, while gathering the day’s mail, we find this note, affixed to our front door with six pieces of tape.  (A note, similar to a posted announcement of more onerous taxes imposed by the Sheriff of Nottingham, if they’d had Scotch tape available in Sherwood Forest.)

Retrieved from the recycling bin for this post, after we originally, cringingly threw it away…well… you can read it for yourselves. 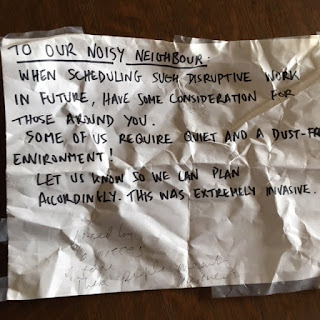 We had seen "The Visage of Evil."

And startlingly this time,

I do hate to be a persnickety pain in the ass (and yes, I do know the word is actually "pernickety", but I think the "s" adds an important zing), but...

The unveiling in ALL THAT JAZZ, one of my favorite movies, is not of an airline commercial. It is of a musical number from "New York to LA", the stand-in for the musical CHICAGO that Joe Gideon is assembling for Broadway while simultaneously editing a movie about a dark comic (a stand-in for the movie LENNY) and trying to bring one of his dancers, hired for her acquiescent personality and attractiveness to Gideon personally, up to snuff *and* trying to keep his daughter, girlfriend, and ex-wife from being too disappointed in him.

I can see why airline commercial might have stuck in your mind, though.

If you don’t already know who the complainant is there may be a clue in the spelling of neighbour.