There’s an article in the paper, reporting on a nearby place where you can do yoga on a horse.

And away we go.

Apparently, the Michigan City weatherman has an ironic sense of humor, predicting a next-day temperature of 68, but factoring in the humidity, it’s going to feel like it’s 69.  (The man actually wrote that.)

Otherwise, he got everything wrong.  He said, “sunshine” and it rained, predicted thunderstorms and it drizzled.  How does this guy even go home?

“I wore a raincoat…”

“What do I say to my friends?

“Tell them we use the most advanced meteorological techniques.”

Drought-ridden SoCal (Southern California) visitors are literally enthralled, experiencing “the elements.”  Although one evening we were taking an after-dinner stroll and a bolt of lighting flashed down directly across the street, followed immediately by ear-shattering thunder.  That one was too close for comfort.  Had we been walking across the street, we’d have been two Jewish cinders on the sidewalk.  Septuagenarian charcoal.

I actually belted that out during a thunderstorm, receiving (imaginary) compliments from my admiring chorus-mates.

“Stick you in the back.”

Isn’t that wonderful?  Your own personal fantasy, and you still can’t get a break.   I could have imagined anything.  Did I really need that?  Oh well.  What are ya gonna do?

The Dunes Summer Theater had fallen on terminally hard times.  In the past, we had enjoyed many locally-cast productions at the nearby tumbledown facility, but acute money troubles had ended its multi-decade theatrical run, a loss we sincerely lamented.

The organization was flat out adorable.  When I once called there from California, asking for information concerning their upcoming summer schedule, the woman answering the phone replied, “Well I am in the bath right now…”

It was sad that there was no more Dunes to go to.  We missed its “always-there” availability, its proximity to the cabin, its pristine “Let’s put on a show” enthusiasm.  Their Pirates of Penzance – swear to Gosh – it was better than Broadway!

Imagine our excitement when, after a series of shuttered summers, we find the Dunes returned unexpectedly from the dead.  With six new, seasonal productions, none of which, unfortunately, fit into our travel schedule.

But at least it was still with us.

Curious about the surprise turnaround, we walked over to the theater one morning – the local weatherman had predicted showers, so we knew we were okay.

Seeing a light on, we headed to the open back-of-the-stage area, discovering two “multi-purpose” stagehands who confirmed that the Dunes was indeed healthily back in business.  Proudly, they displayed the old theater’s upgraded lighting system, its sparkling, colorful coat of paint.

“What happened?” I smart-assedly inquired.  “Did someone die and leave you a whole bunch of money?”

“They did.” I was startlingly informed.   (You can imagine how that felt – the surprise “smartass rejoinder.”)

I was initially delighted by the bequeathed comeback.  Further investigation, however, revealed worrisome alterations in its procedure.  The Dunes was now recruiting professional actors, sacrificing, in the name of “superior talent”, our opportunity to watch the local assistant manager at Denny’s and the optometrist with the powerful pipes wow us with their untutored abilities.

For us, that was a significant element of the Dunes’s inestimable appeal – eager amateurs, absent the sweaty fingerprints of ambition.  The Dunes had indeed returned from the dead, but its inspiring genuineness was now history.  Though I was assured the neighborhood “non-pros” were still permitted to audition.

The Dunes was indeed back.  But for me, something essentially valuable would henceforth forever be missing.

On our first night, we ate at Stop 50, a superior pizza place half a mile from our cabin.  (“Stop 50” refers to a corresponding designated bus stop at the beach.)  Ever on the lookout for souvenir t-shirts, I asked our waiter about his, which had immediately caught my eye.

Our waiter informed us that a co-worker had been deployed on a military assignment and that, before he left, his pizza restaurant amigos had made up this t-shirt, honoring his temporary departure.  “I’ll take a ‘Large’”, I excitedly proclaim.

This is the back of that t-shirt, created by the Michiana pizza place, commemorating their absent, combat-duty co-worker. 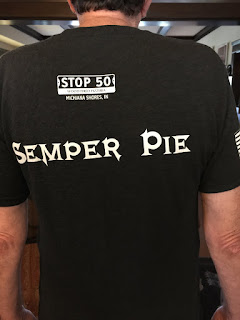 Is that cool, or what?

Overall assessment of our weeklong excursion to Michiana, according to my “Souvenir Merchandise Scale Of Satisfaction” (based on souvenir purchases):

Three t-shirts and a hat.

Not bad for a place where there’s nothing to do.

With any luck, we will be back there next summer, doing, easily imaginably,

Final “Police Call” entry… (Where else am I going to use these?)

“Police received a harassment complaint from the 300 block of Vail Street regarding a neighbor yelling obscene comments from across the street.”

Look out!  It’s the first step towards Armageddon!  Who knows?   Maybe they’ll redeploy the Stop 50 soldier to subdue the uprising.  I know.  They have bad stuff there too.  But how many places have that?

It’s an unusual place, I tell you.  One of our waiters nearly burst into tears when I rejected ground pepper for my salad.  Out here, I’d get a “Whatever.”

Okay, I’m home now.  I know that because on my recent “Thursday Walk” I saw a man plucking a ukulele, riding a bicycle.  That’s pretty cool too, I suppose… in a wacky, California kind of a way.

Wait.  Hold on a second.

Yup, I am back all right.  I got my first unsolicited “Robo-Call.”

In Spanish.
Posted by Earl Pomerantz at 4:00 AM

Oops, forgot to ask...how did you wind up with a cabin in Michiana? Not overly convenient to Santa Monica.