"The Brothers Of The Spear"

In the Tarzan comic books, which were my hands-down favorites, embedded between the transporting “Tarzan” adventures was a companion series – to fulfill the “a 52-page comic magazine” declaration – entitled, “The Brothers of the Spear”, featuring Dan-iel and Natongo.

That is all I can remember, and I would like points for remembering that much.  We are talking about the 50’s.  (I shall leave “points allotment” decision to you.  I am sure you will do the right thing, as you are fair and compassionate people.)

I was always taken with the identifying “Brothers of the Spear” configuration, although in real life, I am not habitually a “joiner”, eschewing all forms of collective affiliation.  Where I am accorded the alternative.  I am a member of the Writers Guild less by choice than because you are forbidden to work professionally if you aren’t.

Not to get overly serious or tediously long-winded, although the Ship of Long-Windedness may already have sailed – and also not to offend readers who are happily affiliated with something, which means virtually everyone, except hermits, agoraphobics, “Bubble Boys” unless there is an “International ‘Bubble Boy’ Association” and there well might be and, minus that mandatory Writers Guild requirement, me.

Although I understand and respect “Identity” associations, I have a troubling difficulty with the overall concept (and its inescapable consequences), in that it runs contrary to my basic my organizing principle of “We are all in this together”, with an emphasis on “all” and an even greater emphasis on “together.”

The camp song they had me lead was called “We’re In The Same Boat Brother.”  Apparently, its musical message sank in.

That having been said – I imagine, to people who substantially although hopefully not angrily disagree – there is one group I am delighted to identify with, because doing so makes me viscerally encouraged and weightliftingly happy (In that it lifts a weight off me not that I’m happy about weightlifting.)

No “litmus test.”  No initiation.  No unshakable doctrine.  No “Us versus Them.”

That’s the only group I am interested in.  And choose to energetically promote.

I discover something somebody made up.  As a guy who also makes stuff up, I identify – and bondingly connect – with the wondrous originality of their effort.  I share my discovery with you guys, hoping you will respond in a similar fashion, and for a moment at least…

Check out the following New Yorker cartoon and let me know what you think.

To its creator, I say,

Way to go, “Brother of the Spear.” 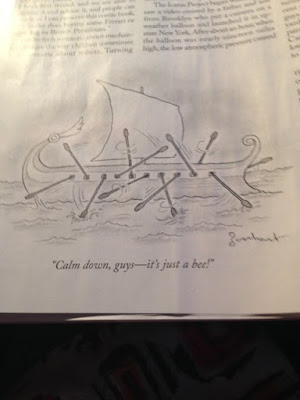