MEMBER OF A COUPLE TO SINGLE PERSON:  “Why are you looking at my spouse like that?”

Okay, maybe I can understand it a little.  (And, by the way, I’m flattered.)

Anyway, this time, more than thirty years ago, I was visiting by myself.  And early on in my week’s stay there, I ran into a late-twenties woman named Oprah who did news features at a Chicago television station traveling with a similarly-aged female news anchor from Washington D.C. whose name currently escapes me but I shall alert you when it comes to me.

In surprisingly short order, the three of us become virtually inseparable, except when they went to exercise classes and I didn’t.  We’d eat our meals at the same (unassigned) table, we’d hang out in the lounge in the evenings – me and my congenial companions.  It was a very nice thing to do.  (And an unlikely occurrence I had arrived there as a couple.)

Tuesday afternoon, while I was napping on a couch in the lounge – can you imagine being too lazy to move my body to the hammocks which you can literally see outside the window?

Oprah’s companion’s name was Ellen.  It just came to me.

Full Disclosure:  About two paragraphs ago, to jog my memory, I actually “cheated” and Googled “Common Female Names”, but I got bored half way through the “A’s”.  “Ellen” came to me entirely on my own.

Anyway, somebody’s tapping me out of unconsciousness and I gradually come to.

More Full Disclosure:  Being a rigorous compendium of “Personal Embarrassments”, I recall to this very day emerging from “Nap Town” with a trickle of drool descending from the right side of my mouth – I am now and always have been a “Righty Drooler”.

And now, back to our story.

I blink myself into alertness, and I see Oprah and Ellen standing directly over my extended and recently comfortably sleeping body.

Oprah apologizes for the interruption in my activities.  She then informs me that she is leaving the “Ranch” immediately, having woken me up to say good-bye.

Still woozy, I pull myself to met feet for a farewell hug, my final words to her being,

“Good-bye, Ophah”, which I inadvertently pronounce “Aw-prah”, as in the “Grand Old Opry.”

“It’s ‘Oh-prah’”, she reminds me without rancor.

And then she is gone.

In the ensuing days, I continue hanging out with Ellen, not quite badgering her but itchingly curious about Oprah’s premature departure from the “Ranch”.  For the rest of our stay, however, and later when we visited the San Diego Zoo killing time before our respective planes took off…

She steadfastly refused reveal the reason.

During which Oprah Winfrey has catapulted to Fame and Fortune and we have just returned from a family “Christmas Week” vacation in Hawaii.  An egregious non sequitor?  No.  Just inelegant writing.

About two hours after we get home, I get an excited phone call from Step-daughter Rachel.

“I know why Oprah left the ‘Ranch’!”, she exclaims enthusiastically.

Rachel explains to me that while we were away she had recorded the intervening episodes of “The Oprah Winfrey Show” so she could watch, or at least skim through them, when she got home, which she had just done.  As a result, Rachel now knew –  and was about to reveal to me

I was understandably excited, eager to hear the solution to a mystery that had befuddled me for over a decade and a half.

To Rachel’s surprise and amazement, Winfrey had revealed this story on her show:

It seems that Oprah had traveled to the “Ranch” in an effort to win a “weight-losing contest” with an unspecified companion.  On that notorious “Exit Tuesday”, she had received a phone call from Steven Spielberg, for whom she had previously auditioned for the movie The Color Purple.

Spielberg informed Oprah that the part of “Sofia” was hers.  But on one condition:

She had to remain the same weight that she had been when he had originally auditioned her.

She immediately departed the “Ranch.”

(Curious Side Note:  Once, years later, I happened to be flipping by her show, and I heard Oprah retelling that story.  Oddly, however, she mistakenly attributed to it having taken place at “Canyon Ranch” in Arizona, which it hadn’t, because I had never visited “Canyon Ranch” and I was definitely present when the incident occurred.  It’s kind of weird when you know someone else’s story better than they do.)

And here’s proof, as seen by my own eyes through my own personal camera.  I do not know who the guy in the back is.  He probably knew I would be writing about this some day and simply wanted to be remembered. 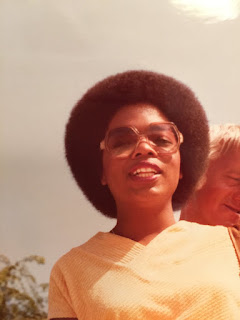